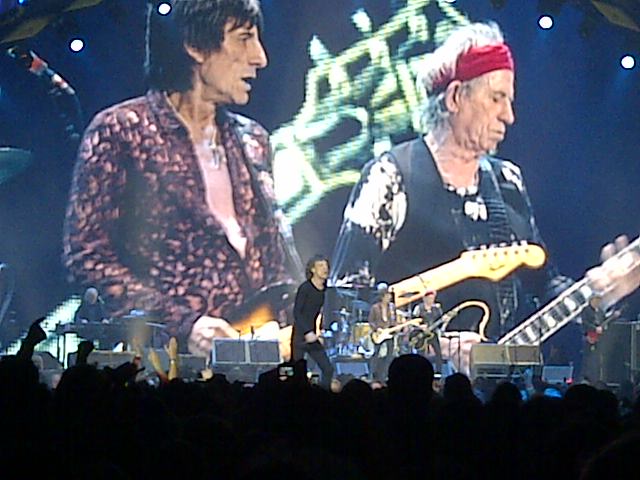 We were there….. and it was amazing.

We were going trough blogs, official website, fan clubs…for years…just waiting for this news: Rolling Stones back together in stage for their 50th anniversary.

We knew that, if this was going to happen, the show would have been something special, something to fix in our memory forever.

And it as exactly like this: 29th November 2012, London, O2 arena……. “ladies and gentlemen, The Rolling Stones…… ” the crowd exploded and we are sure somebody cried

But this was only our show: on stage, 5 concerts only, will join  also Bruce Springsteen, Jeff Beck, John Mayer and many more.

Tickets……very expensive ( we paid our ticket over 1000 dollars)…this reflected in to an audience not very young (average age around 40) but…..trust us! they were all rocking as kids!

When we bought them we saw: seated tickets….. but… who wants to seat during a Stones concert? Nobody….the crowd was all standing up and , if it wasn’t for the security that was not allowing anybody to leave his seat, we are sure it would have been a chaos ( a good one….)

We wanted you to experience the same emotion we had, so for this reason we made a lot of videos that you can find in our channel in YouTube  http://www.youtube.com/user/TheRockyourlyrics?feature=mhee  (go and visit it , you will find many more videos taken live during concerts)

Mick Jagger said during the show: you know folks, last time we ended up late with our first gig….and they gave us a fine! unbelievable ! 100.000 dollars! but this is the price of 100 tickets…..then it is fine!

The setlist was known before the concert but everybody was waiting for Satisfaction, that incredibly, was “forgotten” during the first gig the 25th of November.

The lyrics of Get off my cloud have been written by Mick Jagger while the music was mainly done from an inspiration from Keith Richards.

This song was released right after the huge success of the Stones, Satisfaction, and it is a strong message to everybody was asking the band: “what you gonna do after satisfaction?” It comes like : “we know we will become the best rock band ever, leave us alone”

It happen really like that…….. Ladies and Gentlemen: The Rolling Stones!