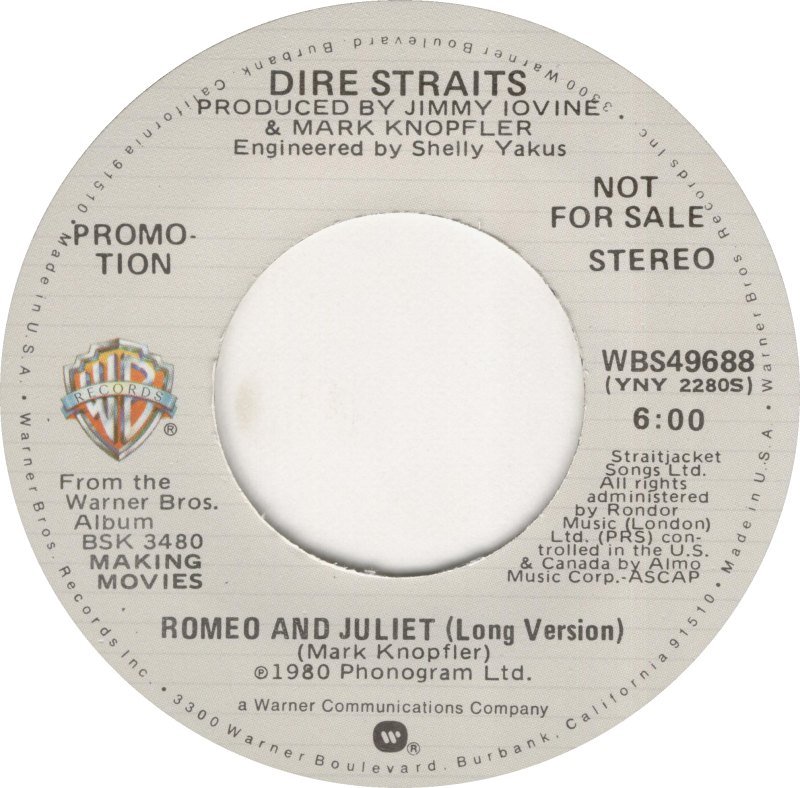 We still have the pleasure to listen to Mark Knopfler live, but Dire Straits are officialy spread out since 1995.

The name of the band is very explicit: dire straits = whitout money, it has been created in 1977 when the band was founded by Mark Knopfler (vocals and guitar), John Illsley (bass guitar) , Pick Withers (drums) and the brother of Mark, David Knopfler.

The sound and the guitar techniques used by the band are very particular; the sound is a classic rock and roll with influences of Jazz, Blues, Folk while the guitar technique is the finger-style picking (to differentiate with the classical use of the plectrum).

The success of Dire Straits came almost by chance when Mark wrote “Sultans of Swing” that was given to the radios (can you imagine?) as a demo.

In 1980 the band released the album “Making Movies”, the third album of the band that contained singles as “Tunnel of Love”, “Expresso Love” and “Romeo and Juliet”.

Looking at the title of these songs the album cannot be anything else than very romantic one.

Romeo and Juliet was written by Mark and is inspired by the Shakespeare play even if it is talking about a modern Juliet that abandon Romeo and all its previous life after having found fame in tv.

Romeo is going around the street singing a love song that talks about a desperate love for his Juliet that will never come back.

After 2005 Mark Knopfler wrote several albums, the last one is dated 2012 (few months ago) and it is called  “Privateering”.
We listen to it and we can say it is indeed a folk rock album; we suggest you not to loose “Don’t forget your hat” and “Radio City Serenade”