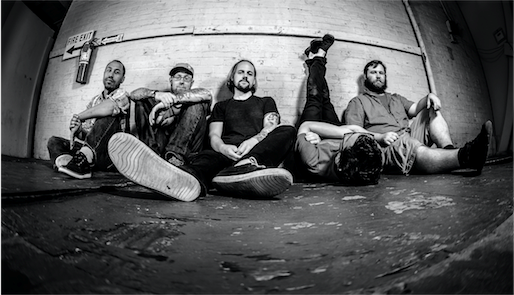 Los Angeles, CA – Philadelphia avant-metal band Rosetta have unveiled the first new song, “Dètente,” from their 6th studio album, Utopioid, which is due out tomorrow, Friday, September 1st. The track is available for exclusive stream today at DecibelMagazine.com.

Fans can purchase the full-album tomorrow, only at BandCamp.com: http://theanaesthete.bandcamp.com.

“This song was among the earliest we wrote. It came to represent a turning point in the album’s narrative and the first time we experimented with having multiple authorial/lyrical perspectives in one song.” – Matt Weed, guitar

On their 6th studio album, Utopioid, Rosetta has unshackled themselves from past restraints and are further exploring their sound, pushing their music beyond the confines of what’s expected.

The highly-anticipated album is a crushing hour long, intense journey that takes fans through a dynamic range of emotions while soaring to new creative heights.

“Composing Utopioid, we were wholly devoted to realizing the concept, disciplining ourselves to let the narrative shape all parts of the album — not just the lyrics, but everything down to the subtle ways rhythm or effects could alter the mood.

We quickly let go of the imperative to write for live performance; although we will play many of these songs live, we felt freedom to explore the furthest reaches of our skills and imaginations.” – Eric Jernigan, guitar/vocals

Utopioid was engineered and mixed by Francisco Botero with assistance from Alexis Berthelot at Studio G, Brooklyn, NY, July-August 2017. The record was produced by Botero and Rosetta, mastered by Carl Saff with artwork by Jordan Butcher for Studio Workhorse.

Rosetta will embark on a month-long North American tour in October to support the new album. Tucson sludge act North will be opening the shows. Tickets are on sale now.