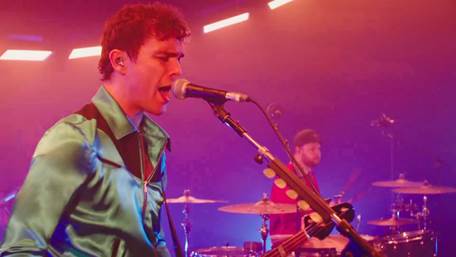 Mighty U.K. rock duo Royal Blood have returned to live performance last night with a triumphant  bang, playing their current hit single “Trouble’s Coming” on CBS’s The Late Late Show with James Corden who referred to them as, “my band, magnificent and exceptional.”

“Trouble’s Coming,” Royal Blood’s first new music since 2017’s chart-topping second album, ‘How Did We Get So Dark?,‘ was released September 24th and has already exceeded 6 million streams and impacted rock, pop and Alternative radio charts around the world including Radio’s 1’s A-List in the U.K. and the US Top 20 Alterative and Active Rock charts and still going strong as we head into the Holiday season.

“Trouble’s Coming” tees up what to expect from Royal Blood’s third album –set for release on Warner Records this Spring — a very organic infusion of their visceral hard rock sting with a disco-tinged rhythm that grooves rather than pummels and immediately drew rave reviews.