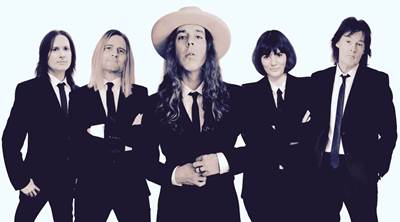 Ryan Hamilton and the Harlequin Ghosts have released their newest single “Straight Up”. The Texas-and-UK-based band puts their classic 60 and 70s inspired rock twist on Paula Abdul‘s classic 80s hit. Channeling classic rock influences like The Beatles, The Rolling Stones, Bob Dylan, the track gives a taste of what’s to come from the rockers. Ryan’s classic rock influences plus a bit of country music from growing up in a small town outside Fort Worth, Texas laid the foundation on which Ryan Hamilton and The Harlequin Ghosts formed and are creating music for Wicked Cool Records in partnership with The Orchard, beginning with “Straight Up” and soon to be followed by a forthcoming original single, “Bottoms Up (Here’s To Goodbye) – PREORDER HERE.

After stints in the bands People On Vacation (with Bowling For Soup‘s Jaret Reddick) and Smile Smile, this new phase of Ryan’s career began with a late 2016 single called “Fuck You Brain” which he wrote and recorded with friend Ginger Wildheart of the legendary U.K. hard rock band The Wildhearts. The melodically rocking track caught the attention of Wicked Cool honcho Steven Van Zandt, who added it to his Underground Garage playlist – along with half the songs from Ryan Hamilton & The Traitors’ 2017 album The Devil’s In The Details.

The timing could not have been more perfect. “Something clicked the last year or so,” shares Ryan. “I feel like I’ve finally found my voice and my confidence as a songwriter and performer.” The renewed attention set the stage for a name change, and the band reconstituted itself as Ryan Hamilton and The Harlequin Ghosts. The band is preparing to embark on a U.K. tour, with more shows to come. Ryan is its only American, the rest hailing from the U.K. Core members Mickey Richards (drums) and Rob Lane (bass) were the rhythm section from the British touring incarnation of People On Vacation. When they play as a five-piece, the lineup is rounded out by Carol Hodge (keyboards and backing vocals) and Dave Winkler (lead guitar).