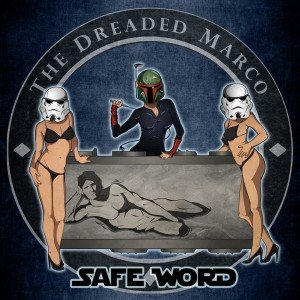 RYL: Let’s talk about the new album “Safe Word”, what it means for you?

THE DREADED MARCO: Well, obviously Safe Word means something different to everyone, be it, “toboggan” or “difficulty” perhaps even “radishes”.

But, I think to the band, we wanted Safe Word to grab people’s attention, but leave them wondering what could be inside waiting for them to hear.

This album is more eclectic than our previous releases, and I enjoy that.

THE DREADED MARCO: This record was a long time in the making, songwriting wise. Its hard to choose a favorite. I will vote “Safe Word”, the title track. I’ve always been a fan of depression era blues, big band jazz, all the stuff that came out of that time when everyone was poor, and a little scared.

The music is a bit scary, and even when its soothing, the listener still senses impending gloom. I feel like that track, specifically, captures that sound and feeling.

THE DREADED MARCO: This album has actually had some lyrical collaboration between myself and Scott Williams, our bass player.

I know I always write music first, then melody, and let the mood guide what I want to say lyrically in the song.

I think, at least in this record’s songs, Scott may have had his lyrical content before writing music. I can’t be certain, as everyone does the writing process differently. I’m just happy we have something to say that nobody has told us is dumb…. Yet.

Or to our face.

THE DREADED MARCO: I really like the second verse of “Hide & Seek”. If I may be nerdy, I like the assonance at the end of the verse between ice/lies/spite/pride/ then trouble.

I like that one because its raw. Its got an element of untethered emotions, not necessarily being able to approach things calmly. Almost idicitive of a blind rage. I just thought that was a powerful verse.

RYL: What is the meaning behind “I run cloud city”?

RYL: Do you remember the day you wrote “Soul For Sale” ? what inspired its lyrics?

THE DREADED MARCO: Scott came to me with the outline of lyrics for “Soul for Sale” and we worked them out together into the final version that one now hears.

That song is as simple as it seems, the devil’s come for his due, and you can always tell whose willing to sell.

THE DREADED MARCO: It really depends on the mood, but definitely somwthing I could make a big funky entrance to a place qith. Like a “The Message” by Grandmaster Flash & The Furious Five, or “Fame” by David Bowie.

THE DREADED MARCO: We are in talks with potential management, we want to get out onto the road here in America.

I think ideally, we would like to find a group with distribution/media connections in Europe and S America. American Rock has become a bit corporate sounding, generic.

But that’s what continues to sell here in rock, so that’s the palate listeners have refined themselves to. I’m not dissing the listeners, I’m just saying we don’t fit the current mold on the radio in the States, but our individually touring efforts have shown us there are a lot more diverse tastes and excitement for live music outside the states, we’d like to go there.

RYL: “Lesser of two evils” appears to be one of the fans favorite, what inspired its verses?

THE DREADED MARCO: That one’s a breakup song.

Not too much dancing around that one. I think it gives a bit of all the emotional peaks and valleys that a person goes through the moment they’ve truly realized a relationship has failed, but not yet ended.

THE DREADED MARCO: I took the remaining bottles of crappy house red wine from the band Live’s dressing room recently after hanging with them for a meet and greet. I guess that’s more petty theft than crazy, though.

Once at a festival in Germany in 2004, a fan found out all of our luggage had been delayed because of a British Airways strike, and we were all just arriving with the clothes on our back and a carry on bag.

He brought us changes of underwear, which was incredibly nice, but they were his underwear. It was a bag full of tidy whiteys, not unlike “the ringer” Walter throws from the car in the film The Big Lebowski.

Ryl: Tell us about your next projects….

THE DREADED MARCO: We are really pushing to get ourselves aligned with a booking agency and management to take this show on the road. While in talks, we are playing locally and writing more new material. We are also storyboarding some video ideas for videos for Safe Word, so look for that very soon!