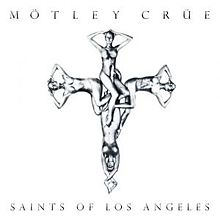 We didn’t know that the current guitarist of Guns and Roses , DJ Ashba, helped Motley Crue to write one of the song of the band that we love the most: “ Saint of Los Angeles”.

The song is part of the album that carries the same name that was released in 2008, the ninth album of the band and the first one after a hiatus that lasted for eight years.

It quickly reached number 5 in the US Charts and is one of the most famous song of the band , even if, in our opinion, it must be played more often.

The song is about Motley Crue; it talks, according to some sources about the relationship between the band and Elektra records… the band will not stop, they will continue to do what they want in the way they want, nobody will stop them.

What you have seen till now is only the beginning, “wait till we go down in flames !”

It is a resurrection of the band after a decade that was full of excess , drugs, alcohol , sex……….

Maybe, even if we still see his devil tail……