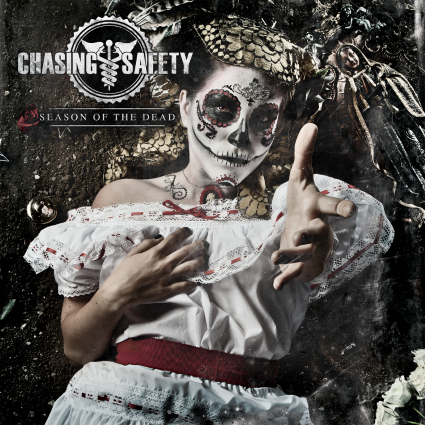 Season of The Dead – interview with CHASING SAFETY

RYL: The 14th of October you released the album “Season of The Dead”; we listened to it and it has a great energy! Lyrically speaking, what does it represents for you? How was the reaction of your fans on the new songs?

CHASING SAFETY: (https://twitter.com/chasingsafety_) Lyrically the songs are all over the place. I didn’t want us to be one of those bands that just write about the same old stuff.

The lyrics vary from songs about us as a band, my personal thoughts on specific issues and then there are also songs that almost tell a story.

The response from fans so far has been awesome.

A lot of fans have gotten exactly what I was trying to portray in specific songs, even the songs I was unsure to if they would or not.

RYL: Among the new songs released is “My Revenge”….What inspired its lyrics?

CHASING SAFETY: “My Revenge” is a song that was inspired by people from my hometown and some people in the local NJ scene.

When I was in just a local band there was a specific group of people that always had my back and supported me 100%, then there were the people that just were to cool and smug because of just being in an underground band.

Once the band started to get more and more notice those people almost switched. The people who had my back, who I talked to all the time, were all of a sudden too cool for some reason.

Then the people that used to be to cool all of a sudden were up my ass and talking to me. It was almost as if I just now met their approval for them to acknowledge the music I’ve been doing for years.

The message in the song is basically to just not even care. It sucks that the people can be two faced and shitty but the only thing you should focus on is pursuing whatever it is that you are doing and to strive to succeed in it.

Being a good person with a good head on your shoulders is more important than getting back at anyone or trying to get “Revenge”.

RYL: Is there something that ties all the songs of the new album?…A common theme?

CHASING SAFETY: No, not really. Each song can stand alone and has it’s own theme or message. What we tried to do to hold the whole record together was, make every song rad as fuck. We think we did, we just hope the fans think so too.

RYL: Do you remember how you wrote “Till Death Do Us Apart” ?

CHASING SAFETY: Steve wrote the instrumental part but the song eventually went through a few changes. He didn’t think the song was going to make the final cut because he was never too happy with the original chorus of the song.

About a month before we went into the studio his brother came into his room with his guitar and showed him a chord progression he was working on. Steve loved it and immediately wrote some vocal melodies over it.

The demoed lyrics actually ended up being pretty much identical to the final lyrics. Steve realized the part they wrote would be perfect as a new chorus for “Till Death Do Us Part”, so he told Steve to use it.

He knew right away the new chorus gave the song exactly what it needed to be on the album. After that Steve and Derek rearranged a few parts to give the song a good flow and we gave the song to me to write lyrics and my vocals over it.

The song is one of my personal favorites lyrically. I am a big fan of crime shows and wild stuff and that’s exactly what the song is like. It’s about a mentally screwed up dude falling in love with a stripper and creating his own illusion of what he though was “love”.

He ended up stalking the woman and being arrested. The song is told from his point of view of the actions that took place as he is telling it to the police.

“Far Away” and “Till Death Do Us Part” I wrote around the lyrics that were demoed out.

We all loved them and they were perfect for what I wanted the song to be about.

The subject of each song depends on my state of mind or personal mood at the time that I’m writing that specific song.

CHASING SAFETY: Truthfully I have no idea.  I enjoy the verses in “Till Death Do Us Part” a lot.

CHASING SAFETY: For me personally I would say “My Revenge” or “Till Death Do Us Part”

RYL: What does “One Can Only Hope” represent for you?

CHASING SAFETY: “One Can Only Hope” is a super fun song for me. The song is about trying to actually do something while you are here on earth, basically, to leave a legacy and be someone to be proud of.

I tried to write this song in a fun way but serious at the same time.

RYL: Tell us your dream concert? Where it would be?

CHASING SAFETY: My dream concert would be with Hanson, Slipknot and a super band made up of all of my friends from a bunch of the bands I have met through doing music.