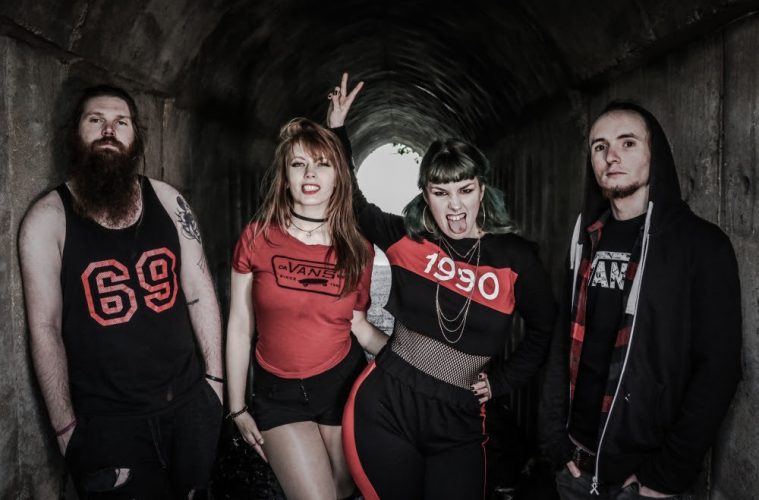 Is there a link between all the lyrics of the songs from your EP “Second Load” released last year?
Other than the usual themes of love and adventure there wasn’t a continuous story being told through the “Second Load” EP.

How do you usually write the lyrics of your songs?
We usually get a basic version of the song down and then I listen over and over to gain a better understanding of where it’s going or where I want it to go and what emotions the music evokes for me. To be a normal functioning human I have to really suppress any kind of negative emotion so I have to dig really deep to find the words to tell a good story.

What is the best verse you ever wrote?
It’s definitely got to be on the next release. “Never Say Goodbye” is my absolute favorite so far!

What was the soundtrack to your childhood?
Journey’s ‘Escape’ album! What a banger!

What was the first record you ever bought?
Sum41 – All Killer, No Filler! I think I was 13! They were the first band I saw live too!

What has your journey in the music industry been like up to now?
It’s been a rollercoaster ride that’s for sure! We recently had a very bad experience with what should have been a pretty decent two week tour falling through, which was no fault of our own. But other than that, it’s great! We’re best friends, hanging out, making music we love and we get to meet the best people. It’s the kind of journey we don’t want to stop.

What inspired “Never Say Goodbye”?
“Never Say Goodbye” is inspired by grief and heartache. My dogs are my babies and they are the most precious things to me so when my little princess died I was, and still am totally in pieces. Time is definitely a healer, but I’ll never say goodbye.

Do you remember the day you wrote “Play By The Rules (or not)”?
I do! Chops came up with a totally dirty riff, it was sexy and angry! Other than that I don’t really remember much other than it making me want to grind up on something.

Are you ever scared of revealing, aspects of your personal experience, to strangers through your music?
Sometimes I am yes. I often like the listener to be able to interpret the song however they wish or allow it to enhance whatever mood they are in. I think a lot of the things I sing about actually can’t be spoken about, so to be a little bit cryptic and to be able to belt it out is a very cathartic experience. I think this might be the first time I’ve said that “Never Say Goodbye” is about my dog, and it’s usually out of fear that people think the content is ridiculous that I don’t talk about it. But my heartache is very raw and very real and to sing about things like that gets better results.

What inspired “Collide”?
“Collide” was written about summer adventures and the memories around it. It’s an homage to nostalgia and those summer vibes!

What is the best show you ever played?
I still think it’s got to be the first time we played with Hed PE in Cardiff! The venue was massive and the crowd was absolutely incredible!