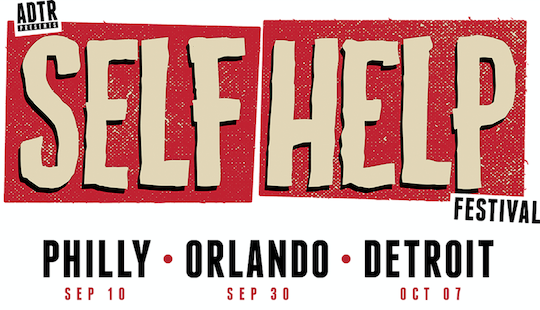 SELF HELP FESTIVAL EXPANDS TO INCLUDE DATES IN PHILLY, DETROIT, ORLANDO & SAN BERNARDINO

July 21, 2017 – Los Angeles, CA – Celebrating its 4th year, the popular punk rock event of the year SELF HELP FESTIVAL will make its anticipated return in 2017 with shows in multiple cities including Philadelphia, Detroit and Orlando and an encore bash in 2018 in San Bernardino.

Today, SELF HELP has announced lineups for the 2017 dates, which will include performances by festival founders A Day To Remember along with Rise Against, Underøath, Pierce The Veil, Falling In Reverse, Moose Blood, Less Than Jake and more!

Curated by A Day To Remember and produced by Fly South Music Group and United Talent Agency, SELF HELP FESTIVAL was started in 2014 with events in Philadelphia and San Bernardino.

Inspired by their fans, the band’s overall mission is to deliver a memorable event featuring bands with positive messages embodied in their music. Past SELF HELP FESTIVALS have included bands like Bring Me The Horizon, Of Mice & Men, Memphis May Fire, Stick To Your Guns, Whitechapel, The Ghost Inside, Motionless In White, Crown The Empire, The Wonder Years, August Burns Red, Yealwolf and Chiodos among others.