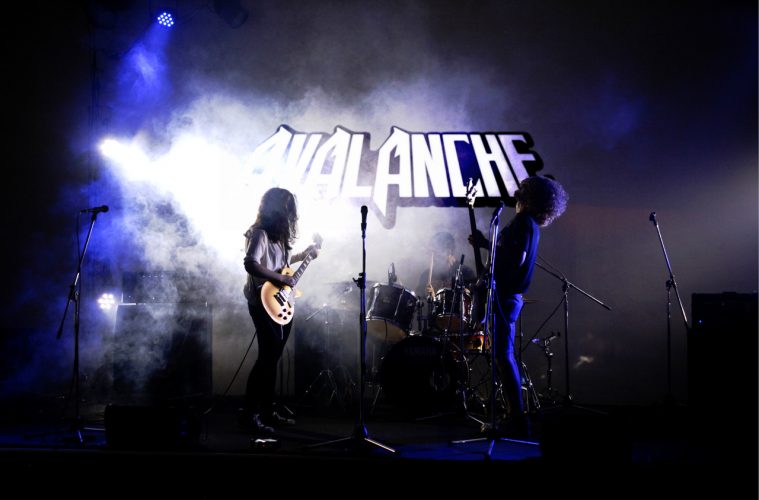 Once we have the basic idea for the song, namely a title, I start to write through a few different versions of lyrics to find out what sounds the best phonetically as well as what I actually want to say. Then it’s generally a few different re-writes and tweaking until I have the lyrics all finished, I write about what I’m thinking a lot at the time and when I have a song in mind that I want to write I find it very difficult to not think about it and even try out things in my head. Veronica, our lead guitarist has wrote some of the lyrics in our songs before as well, but her process is a lot different, she tends to write more Bon Scott inspired lyrics about sex and the like, the dirtier the better for her haha.

I feel like the most important thing is emotion, whatever it is, as long as there’s emotion to it and it sparks an emotion inside you, that’s really what makes everyone tick. Doesn’t matter if it’s happiness, sadness, anger or humour, if it makes you feel something it probably will make others feel something as well.

Not really, I learned long ago that if there’s no way of knowing what someone is thinking about you, then there’s not a lot of point stressing about it, and when it comes to music I find that if I’m writing about something really meaningful to me even if it means opening up about something, it could help others in the same situation, and I feel like that’s a big reason people love music.

I think personally my favourite lyric so far would be from one of our songs called ‘Run Like Hell’, which is a song I wrote about dealing with addiction, and the first verse was, ‘You don’t see me when I look past all your selfish lies, That’s why I take comfort in knowing your sweet demise.’ Can’t really explain why, I put a lot of work into that song and it was something I had been thinking about for a long time before I actually put pen to paper.

What inspired “Headfirst In Hell”, part of your latest EP “Sent From Hell”?

Veronica actually wrote the lyrics for that one before I joined the band. It’s a fast paced rocker about somebody who doesn’t give a fuck about where he ends up, someone who’s here for a good time not a long time. Living a life of sin and just accepting your fate rather than fighting it; going head first into hell, knowing it’s the only place you really belong. I think it was inspired by Bon Scott or something.

And “Sent From Hell”?

We chose that as the title for our debut EP after we’d already put all the songs together and sort of realised there was a bit of a theme to it all. Veronica has always been adamant that a good rock song has either gotta make you want to fight or want to fuck, so these songs sort of encapsulate those two feelings from start to finish and it’s all centred around themes of hell, sin, sex and rock and roll. We thought Sent From Hell would be perfect, it’s just an album full of fast-paced, gut-busting, roof crashing rock n’ roll sent directly from the Devil himself to brighten your day!

Do you remember the day you wrote “Balls Deep”?

Yeah, that was the second single we ever released, I actually had a similar version of the lead guitar riff from an unused song in a previous band, it was a bit more stoner rock/psychedelic influenced tho. I played it to Veronica and Ryan, and then she went off and built up the riff and turned it into a hard rock song. We worked on it in rehearsal for a bit, Ryan (our drummer) came up with the awesome outro build up, then Veronica tells me we’re calling this one ‘Balls Deep‘ so I went off and wrote the lyrics for it and it all came together quite well.

Yeah so as mentioned, this whole EP deals with sex, sin, drugs and damnation, fitting into the whole ‘Sent From Hell’ theme. We also have songs like Get Back and Down in the Gutter about being down on your luck, pissed off and sick of other people’s crap. It’s got a lot of guts in it, lots of raw emotion but it’s a fun listen, it’ll get your head banging.

I believe on the song ‘On Your Back‘ from the EP for most of the song we added a third guitar track that’s like a very quiet chug on the rhythm line and you honestly barely even notice it at all until you take it out, but it was all our producer’s idea and we’re super happy with the end product. I think from that song we learnt that often the most simplest songs are actually the hardest to get right.

We’ve pretty much been gigging non-stop since the end of April to promote our EP , which’ll keep us in action until the end of July, and likely not shows after that. We’re just gonna push this EP like crazy anywhere we can. And we’ve actually got another release and a small tour planned for the end of the year so stay tuned for that, there will always be more coming from us!