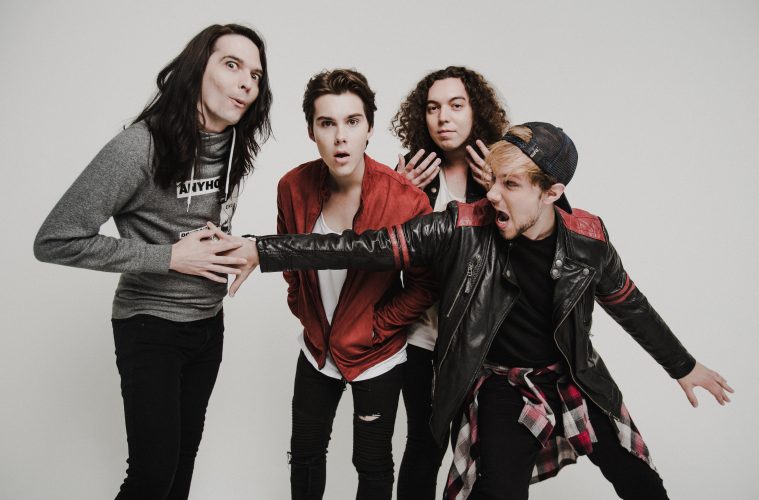 LA’s burgeoning, independent record label SharpTone Records has welcomed Los Angeles based pop rock band Make Out Monday to their ever-growing, eclectic roster that also includes acts like Don Broco, We Came As Romans and Miss May I among others.

“To our fans: It’s been a long process getting this far, and we couldn’t possibly have done it without your love and support. But we’re proud to finally announce our new signing with SharpTone Records!! It’s been a while coming, but we wanted to announce it at the right time, in the right way. SharpTone Records is an incredible group, and they truly, honestly  just seem bent on helping great artists get the promotion and support they need to reach a bigger and broader audience. Also, SharpTone’s got an incredible roster of other bands and artists that we’re super stoked to be a part of! Again, we seriously owe this signing and EVERY LITTLE EVERYTHING else that we’ve achieved to all of you who’ve supported us through the years. So thank you thank you thank you! And thanks to SharpTone Records for this great opportunity to expand and grow!! Seriously… More stuff coming soon.” – Make Out Monday

In conjunction with the signing news, Make Out Monday has debuted a spooky music video for a brand-new single called “Bullet For Your Sweetheart” today.

“Our new music video for “Bullet For Your Sweetheart” is a bloody, cheesy, wild homage to some of our favorite old horror films. Drawing from films like “Attack of the 50 Foot Woman”, “Psycho”, and even “The Texas Chainsaw Massacre”, we wanted to create a video that seamlessly traveled through the years from old monster movies to slasher films of the 70s/80s. It’s all a bit Scooby Doo-ish which keeps it light and hilarious even as people are getting ripped apart. But this was probably one of our favorite videos to shoot. There are pieces in color and in black & white, and we got to spend the whole video acting ridiculously scared as we run from a monster of our own creation (literally we made the costume ourselves). So it was a blast, and we think that’s easy to see when you watch the video!  It’s fun, it’s scary, it’s ridiculous. It’s perfect for Halloween.” – Make Out Monday

Hailing from Los Angeles, Make Out Monday is an alternative pop rock band comprised of brothers Jeremy and Zack Shada, and longtime friends John Spicer and Seth Renken. Make Out Monday’s catchy songs, carefully crafted lyrics and contagious stage presence, have garnered a quick following in LA as well as around the world. Jeremy, who voices the lead character of Finn on the #1 animated show, “Adventure Time,” was appearing at San Diego Comic Con in 2014, the same weekend the band had a scheduled performance at the House Of Blues, in San Diego. Fans from the Con flocked into the show, to see the band for the first time, and were immediately hooked. Over the past two and a half years, the band has performed all across America as well as in the UK, Australia, Germany and the Philippines. They have opened for New Politics and have even co-headlined and performed on stage with DMC of RUN DMC.

Make Out Monday’s recently released album, Visions of Hollywood, is comprised of 11 original songs ranging from pop-punk, to rock and alternative, and was produced by the Legendary John Fields (Switchfoot, Pink), with tracks also by Dan Korneff (Paramore, Pierce The Veil). The record is out now and can be purchased and streamed at https://fanlink.to/MOM.