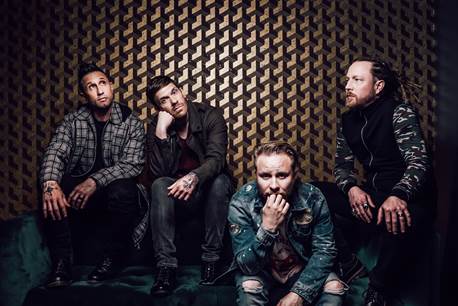 Multi-platinum rock band Shinedown has unveiled their new animated video for their explosive new single “MONSTERS.”  The track, which is #1 on the Billboard Mainstream Rock Songs Chart for the second week in a row, explores the ever-present demons and self-sabotaging inner voices that we all battle. “The masks represent the parts of your psyche that make you afraid of who you are,” frontman Brent Smith explains. “Inside of that, from an album standpoint, ATTENTION ATTENTION is all about not being afraid to fail and not being afraid period because you’re not going to be defined by your failures, you will be defined by the fact that you refuse to give up. Your monsters may be real, but that doesn’t mean you have to give into them.“

The #1 Active Rock radio single, “MONSTERS,” brings Shinedown’s total #1s at the format to 15. “MONSTERS” scores Shinedown their 14th #1 on Billboard’s Mainstream Rock Songs Chart, the second most in chart history, and continues their record of the most Rock Airplay Top 10s ever. Every one of Shinedown’s 25 consecutive singles has reached Top 5 on the Mainstream Rock Songs airplay chart, an unparalleled achievement. “MONSTERS” has already amassed nearly 15 million streams and counting. The music video for “MONSTERS” was directed by Bill Yukich (Beyoncé, Marilyn Manson, Wiz Khalifa) which explores the ever-present demons and self-sabotaging inner voices that we all battle and serves as the next visual installment in the story of the ATTENTION ATTENTION album.

“MONSTERS” climbs to #1 as crossover hit anthem “GET UP” surpasses 40 million streams following the release of the GET UP EP featuring the original, acoustic and piano versions of the song. PRESS HERE to download/stream the GET UP EP and PRESS HERE to watch the stunning video for “GET UP (Piano Version).” “GET UP” quickly became a beacon of light for listeners around the globe, connecting with both those going through hardships of all types and those supporting loved ones who may be struggling. The song landed the band on Live with Kelly and Ryan, was featured in numerous television spots, and has garnered praise from various media outlets.

The summer leg of Shinedown’s 2019 ATTENTION ATTENTION World Tour is underway now with support from Badflower, Dinosaur Pile-Up, and Broken Hands. For all ticketing details, please visit www.shinedown.com. Shinedown has been selling out arenas and receiving rave reviews during their tour, backed by their biggest, most eye-popping production yet. The band will headline Inkcarceration Festival on July 12 in Mansfield, OH and Riff Fest on July 13 in Detroit, MI. Shinedown’s tour will continue this fall, produced by Frank Productions, beginning September 17th through October 19th with Papa Roach, Asking Alexandria, and Savage After Midnight supporting on select dates. The band also recently announced they will join Alter Bridge along with Sevendust and The Raven Age on select dates on their UK/European tour kicking off November 12th in Denmark.

Shinedown’s chart-topping album ATTENTION ATTENTION (PRESS HERE to listen), out now via Atlantic Records, simultaneously hit #1 on Billboard’s Alternative, Top Rock and Hard Rock Albums Charts, debuted Top 5 on the Billboard 200 and spawned #1 Active Rock hit “DEVIL,” and the rousing track “THE HUMAN RADIO,” in addition to “GET UP” and “MONSTERS.”

+ with Alter Bridge and The Raven Age

# with Alter Bridge and Sevendust


Shinedown – Brent Smith [vocals], Zach Myers [guitar], Eric Bass [bass, production], and Barry Kerch [drums] – has sold more than 10 million albums and 10 million singles worldwide, has 13 platinum and gold singles and four platinum and gold albums, and 15 #1 Active Rock hits, and more than 1.5 billion total overall streams to date. Each of Shinedown’s 25 charting singles on Billboard’s Mainstream Rock Songs Chart has reached the Top 5 – an unparalleled feat. The story that unfolds on new studio album ATTENTION ATTENTION is a poignant and enduring statement about humanity, touching on topics such as overcoming struggles, mental health, not being afraid to fail and the resolve of the human spirit. Given the deeply personal nature of the record, Shinedown went in-house for production for the first time ever, enlisting bassist Eric Bass to produce and mix the album in its entirety.