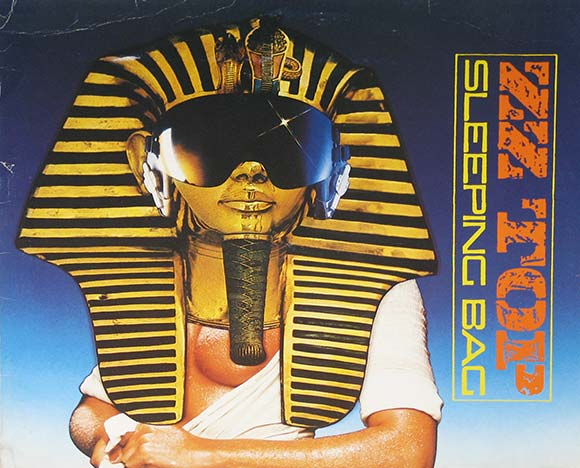 Do you remember when we talked about “Legs” ?

Today we talk about another success from the band from Texas, published in 1985 in the album “Afterburner”, the song is “Sleeping Bag”.

Afterburner is the ninth album made by Billy Gibbons, Dusty Hill and Frank Beard and produced by Billy Ham….rapidly it rose the chart of the most sold albums reaching the status of Platinum Album several times.

Sleeping Bag lyrics are very easy to explain……. the ZZ Top are explaining how it is great to make love with their baby inside a sleeping bag.

They also talk about Egypt that will recur also in the cover of the single where a sphinx is wearing astronaut shades……. the astronaut that is riding on the rocket that is the symbol of the album.

In fact, ZZ Top decided to change their vehicle, from the classic red car called “eliminator” to the rocket of Afterburner ( the car will be destroyed in the video of Sleeping Bag and replaced by the rocket”

The funeral of the Eliminator is very sad…….. the famous ZZ Keyring will disappear once placed on top of the grave prepared for the red car that was part of the success of the previous video of ZZTOP

ZZ Top released their last album in september 2012, it is called “La Futura” a mix of Blues Rock, Boogie Rock and Southern Hard Rock from Texas….