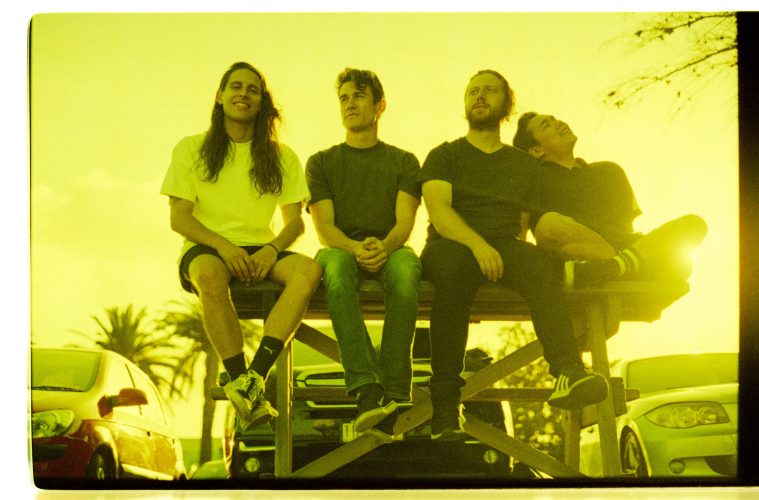 Slowly Slowly lift the lid on their infectious new track “Jellyfish“. Following the whopping response to their 2018 LP “St. Leonards“, “Jellyfish” marks the first taste of new music from the Melbourne four-piece.

Proving a little more cumbersome to construct compared to the band’s previous releases, frontman Ben Stewart explains “Jellyfish” almost took on a mind of its own when it came to recording.

“Usually when we record a song it’s like we are trying to drag the song along behind us as we forage in the dark for what sounds best, but with this one it was the opposite“, he says. “We knew exactly the elements the song needed to work – it really felt like we were being led along the whole time, almost trying to catch up with what felt obvious, but yet really hard to capture“.

Seizing Slowly Slowly at their most vulnerable and uninhibited, “Jellyfish” is about that the all-too-common human notion of existential dread, and how questioning your own existence intersects with loving someone. In true Slowly Slowly fashion, this track feels lighthearted and playful at first glance, but ultimately toys with some pretty heavy concepts. As always, Stewart’s masterful lyricism is front and centre.

“The song is about that out of body experience you get sometimes when you are looking at the world. Sometimes everything just seems so ridiculous – the concept of existing, being in a body, our interactions with feelings and emotions and this wacky 3D landscape we walk around on from day to day which we tell ourselves is normal“, he says.

“I wanted to use that as the backdrop for when you love someone more than anything. How that feeling can make everything pale in comparison, how it can extinguish all existential dread, because as long as we have got each other – who cares? It’s about when you have someone you look out for more than yourself or that you want to succeed regardless of your own circumstance – in that dynamic I think is where you truly tap into the point of all the nonsense. It’s the one thing that makes sense where everything else is just stories we tell ourselves to make existing less confronting”.

Atop the release of “St. Leonards” in May last year, Slowly Slowly went on to amass worldwide critical attention and tour the country twice, including selling out some of their biggest rooms to date. After capping the year off with a huge set at Falls, the band roared into 2019 by supporting none other than Red Hot Chili Peppers, and are now set to tour alongside Amy Shark on her Australian arena tour throughout May.