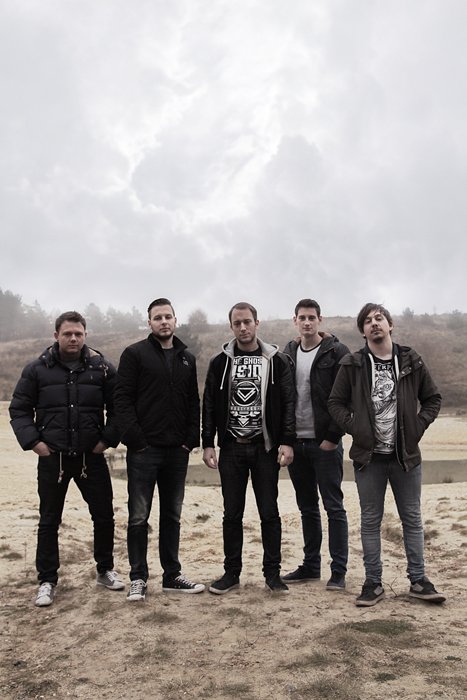 RYL: Your new album “Smoke&Mirrors” will be released in February. What it does mean for you its release? Which was its main achievement in terms of lyrics?

ESSENCE:  After a great year playing lots of shows to present our first full length album ‘The defining elements’ we were very eager to write new music and make a new album. Unfortunately we got held back because I’ve been really sick this last year.

That’s why the band couldn’t release a new album for a long time, I simply wasn’t able to perform or sing most of the time.

Most lyrics are inspired by my  own personal struggles, but they are written in a universal/general way so everyone can relate to them.

ESSENCE: ‘Smoke and mirrors’ tries to convince the listener that we have lost sight of what is really important and need to move away from the message that the media and religions are trying to mislead us with.

ESSENCE: ‘The Climb’ because it’s fast, hard and the words are very uplifting.

ESSENCE: When we’re ready with a new song, we record it and listen to it on repeat. I usually try to find a main theme that fits the mood of the track and resonates with everybody in the band. After we find something,

I write a few versions and the guys give their feedback.

ESSENCE: I don’t have one verse I can point out as the best verse I’ve ever wrote. But  the lyrics to ‘Submerged’ are in my opinion the most honest and true words I’ve ever wrote. They deal with my ongoing struggle with a disease that’s been pushing me back for about ten years now.

You can compare this feeling with endless waves crashing into rocks on the beach, never ending. And in these moments you see who you truly are, you’ve got to find strength where others find defeat.

Keep going when everything seems lost.

These verses remind what it means to lose everything you hold dear.

RYL: what inspired the lyrics of “Smoke & Mirrors”?

ESSENCE: I’ve been battling a severe chronic illness for almost ten years  and I’ve been taken through the wringer for the last two years but I did recover miraculously this summer.

In this period I’ve reevaluated what is important in my life and become more aware of the fact how people are preconditioned into thinking they are a better human being because of their religion, race, origin or sexual orientation.

ESSENCE: It’s hard to pick one song, but the ‘Diamond’ album of Stick To Your guns is one of my favorite albums in this genre.

It has a very positive message and the lyrics are also about appreciating life and having respect for each other. If I should choose one song I’d pick ‘Built Upon The Sand’ because I can really relate to the lyrics in that song

ESSENCE: We’ve played several gigs over the years, and had the honour to support some great bands such as Misery Signals, For The Fallen Dreams, The Warriors, For Today, As Blood Runs Black, While She Sleeps, and so on …

We’re aiming to play more of those support gigs in 2015 and hopefully do some festivals too.

RYL: Which is the best guitar you ever played?

ESSENCE: Our guitarists both play ESP/LTD guitars and they are very happy with them. They are great guitars and ideal for this style of music. Other great guitars they have played are Mayones, Musicman or Ibanez guitars.