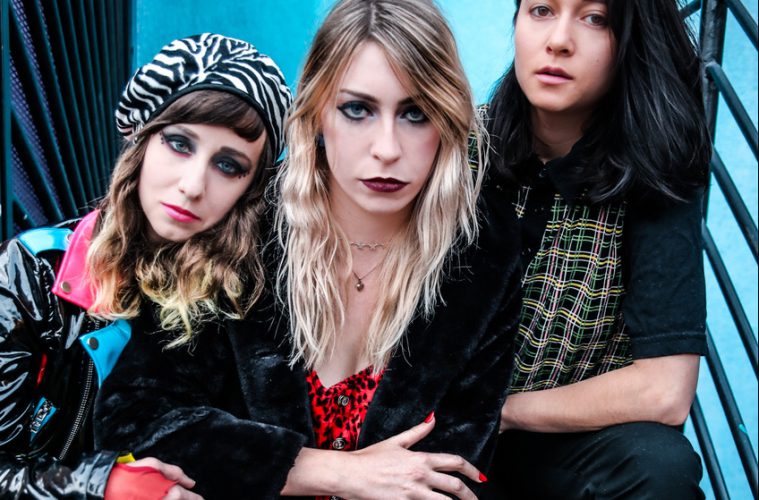 Most of the time it’s so natural it comes out without even knowing what I’m writing about. My brain seems to store up emotional information that only gets let loose when I sit down with a guitar. Sometimes I don’t even fully know what a song is about until my bandmates or someone else asks and I have to force myself to analyze the words. When I get stuck on a lyric it helps if I imagine I’m someone else writing the song. Different perspectives on the situation I’m writing about help me not pigeonhole myself into the same old concepts.

Don’t overthink it. Whatever comes easiest is probably best, and truest to yourself. The more I think about specific lyrics the more I get lost in how many options there are, and it makes it so much harder to decide.

I could tell a stranger anything about myself, but I definitely worry about what my family might say! They lovvve to gossip so I KNOW whatever I write is going to come up at Thanksgiving!

“Starry Eyes” from our new album has a lot of meaning for me. It’s about a pattern I have when it comes to romantic relationships. I feel like I never let myself go in 100% because there’s always a little voice in my head saying, “whats the point?” I’m still so young and have so much I want to do, it doesn’t feel realistic to be fully committed to another person. Obviously I can’t stop myself from falling in love with people, but the cynical side of me can’t help but prepare for whatever life throws at me.

I wrote it on my 22nd birthday! At the time, I felt like 22 was an age that makes you seem like more of an adult. I was 17 when we started Potty Mouth, so I had a reputation for being “really young” for being in a band and going on tour. It made me feel like I had an edge because I was kind of a novelty in the music scene. I was worried that as I got older people would be less impressed by me.

Do you remember the day you wrote “Do It Again”?
That’s actually hard to say because I reworked that song a couple times. The original version had completely different verses and bridge parts with different melodies and lyrics. I knew I like the the pre-chorus and chorus, but the rest just didn’t seem to fit. So a few weeks after it was originally written I sat down with my guitar and played those parts, then played whatever came most naturally to me for the other parts. My main reference that I kept in mind when writing lyrics was “Hang With Me” by Robyn. I wanted “Do It Again” to be Potty Mouth’s version of a fun but dark pop song.

And “Plastic Paradise”?
That song is kind of a blur to me. I wrote it when I was working in a studio in Stockholm back in 2015 with Andreas Söderlund and Joel Sjöö. The 3 of us were throwing around some melodies and pieced together a simple demo of instrumentals. I really loved the song so when I got back to my air bnb that night I kept working on it. I showed up to the studio the next day with a whole bunch of lyrics that I worked out with Andreas and Joel, and we finished the demo that day!

Now that I think about it, I guess the general theme of the album is about feeling misunderstood or at odds with the world. Every song is about very different situations, but they’re all from the perspective of feeling frustrated and being honest about that frustration. That’s definitely a theme in my life. I have a lot of pent of frustrations with people and situations, which I do my best to be open about, but sometimes there’s nothing that can be done about it. That’s why songwriting is therapeutic for me.

Just excited to release “SNAFU” and go on tour! We’re planning to tour Europe for the first time this year.