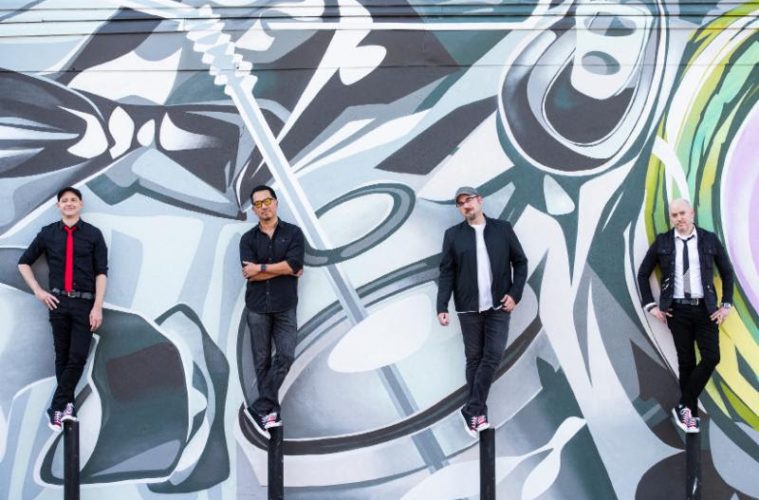 Some Kind Of Lucky – Interview with The Jellybricks

Larry: I try as often as possible to allow the lyrics to write themselves. Often the right words are just waiting to emerge and hit the page, if I can quiet my mind enough to allow them through. But certain sounds will suggest themselves, and suddenly you have a lyrical “hook” that makes sense, which can set a tone, or a direction for a song. Sometimes, when I have tried to deliberately write a particular kind of song, it can be a struggle to find lyrics that fit the idea, or the tone, or the direction of the song. At other times, a song will emerge almost completely at once, with no struggle at all, as if it was a song that had already been written, and just rediscovered. Really, there is no one particular way that lyrics are written, but in the end, I know they are done when they feel right.

Larry: I’ve never thought before about what I would call the “most important” thing in songwriting, but I think there is an aspect to songwriting that I would compare to something else which I love, which is amusement park rides. I have never designed an amusement park ride, but as a rider, I have always appreciated the creativity, thought, ingenuity, and care that must go into the design of the ride, to ensure an aspect of surprises, thrills, perfectly timed respite, and ultimately the assurance of a safe return to the start of the ride. When I write songs, I am always mindful of the experience of the listener, in the same way that I imagine a designer thinks about the experience of the rider of the ride. I want it to feel like a journey worth taking, and hopefully more than once.

Larry: Not particularly. I actually prefer my personal life and experiences to inform my songwriting as much as possible, because I want our music to be something which other people can relate to. We don’t all see things the same way, and we don’t express ourselves the same way, but we are all human, and so we all share the same environment, the same sunrise and sunset, the same stars and moon in the same night sky, and the same life. I don’t imagine that anyone listening to my songs is more interested in my life than in their own, but I know that we share the experience of being human, so we will always have things in common.

Larry: I really have no idea what the “best” lyric I have written would be, and I aim to make all of my lyrics at least somewhat meaningful, but many years ago, I wrote a line which a fellow songwriter more or less “borrowed” from me, so maybe the one worth borrowing is one of the better ones! That line, (which I do still like), was ‘tell the rest of my parade that the rain’s coming down,’ which was really just my own “borrowing” and re-phrasing of a cliche, but that’s part of why I wrote in another Jellybricks song called “Growing Girl,” the line, ‘it’s hard to write a new cliche.’

What inspired “Corner of My Eye,” part of your upcoming album Some Kind Of Lucky?

Larry: “Corner of My Eye” was very much a song that just kind of poured out of a guitar on a Sunday. The lyrics and the music seemed to emerge almost at the same time, and I think the tone of the opening line was very in the moment, a lazy Sunday, dreading the return to the workweek, something to which many people can relate. The song just took its own direction from there, sort of working out the tension knots of a normal life, thinking about getting away from the routines which can feel stifling. I like that the song reflects both the heaviness of what can be stressful in life, and also some of the freedom of breaking out of that.

Tom: This song is about a girl who falls for the wrong guy and gives up who she really is for her financial security. She puts on a fake facade that everything in her life is perfect, but inside she’s a shell of her former self. Lyrically, the song is from the perspective of a friend who cares about the girl and hopes she eventually finds happiness.
Do you remember the day you wrote “Some Kind of Lucky”?

Bryce: This was loosely written in response to a great film I had re-watched, for the third time, called ‘Love and Sex,’ with some actual real life experience thrown in for good measure. It’s sort of a love letter from one main character to the other, and it could be seen/sung from either character’s perspective.

Is there a link/common theme among the songs on the new album?

Bryce: All four of us write songs which come from different places, and then those songs tend to find their way into our common headspace en route to becoming Jellybricks songs, so if there ends up being a theme, it’s not by design. The songs become what they are, and stand on their own, accordingly.

Tom: Musically, our albums always include a stylistic shift or two from song to song, and the new album is no exception, but the identifiable vibe and spirit of The Jellybricks shines through the songs no matter what the style, tempo, key or mood.

Larry: We actually worked with numerous co-producers on Some Kind of Lucky, each of them collaborating in some degree with us as a band. We like to have an objective set of ears in the room with us, someone whom we trust to tell us when we have gone too far, or not far enough. In the case of all of these co-producers, Frank Silver and Pete Drivere at Ampreon Recorder in Youngstown, OH, Scott Ensign at Obscura Sound in Baltimore, MD, and Geoff Sanoff at Renegade Studios NYC, we knew we were working with creative artists who know their craft. We choose people whom we respect and trust to help us deliver our ideas to recorded form, and each of them individually makes suggestions that help us achieve the best results.

Larry: We are looking forward to playing shows in New York and Ohio in September, as well as releasing a couple more teaser singles. On October 4th, our new album gets released along with a new single, and hopefully some new music videos as well. Also, we’ll be playing shows in Pennsylvania and Ohio in October, with more tour dates being added before and after the new year.