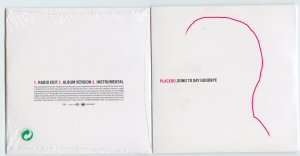 12 millions copies worldwide, this is the number of album sold by Placebo since the beginning of their career back in 1994.

Two were the funding members of Placebo: Brian Molko (vocals and guitar) and Stefan Olsdal (base guitars)

The Placebo’s drummer Steve Hewitt joined just later on and decided to leave the band in 2007 being replaced by Steve Forrest.

As of now they released seven albums.

David Bowie helped them a lot at the beginning of their career and made them know to the public.

The fifth album was released in 2006 and was called “Meds” and “Song to Say Goodbye” was the first single out of the album.

The song talks about drugs and contains also a title of a song written in 1972 by Neil Young : “The Needle and the damage done”.

The drug is the heroin that , as Neil Young once said ” it killed a lot of great men”.

The video, directed by Philippe Andre’, talks about a son ( a kid) that has difficult time in managing his father’s disease.