I had the possibility to interview the beautiful and talented LA Witch (Sade, Irita and Ellie) just before their performance in Paris at Le Batofar in the rehearsal room.

The atmosphere was fun, we spent quite a lot of time talking about their life in their European tour going from a venue to another with almost no time to rest.

We also survived the attack of mosquitos, spiders and other weird animals present in the room….

Their new debut and self-titled album  has received an amazing success and , as a proof of that,later in the night, the venue  was full of people …….even a giant Panda had the opportunity to join them on stage ! 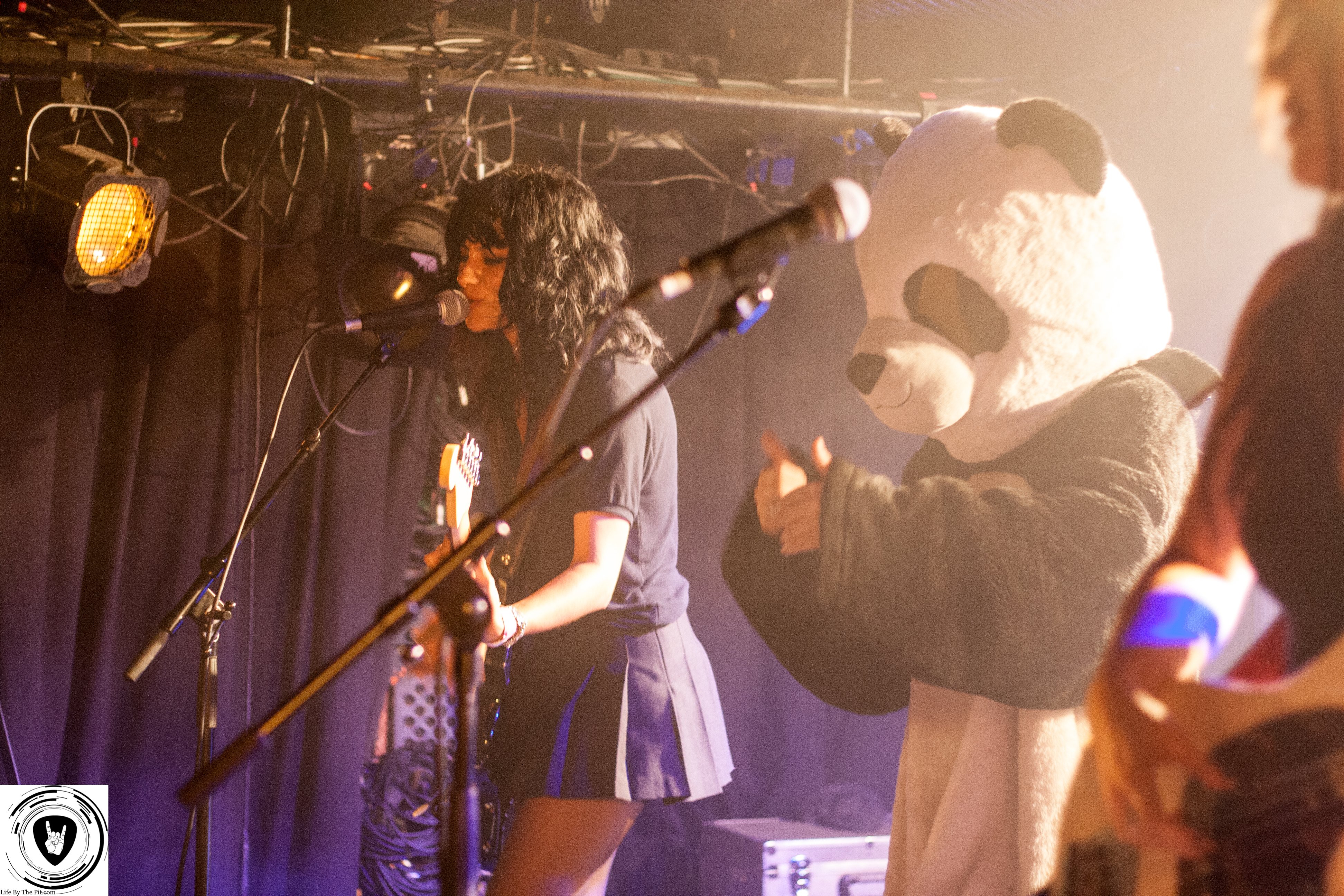 Here is our interview….

Let’s talk about your debut album, as far we understood, it has taken quite a lot of time to write it…..can you tell us more about it?

Well, basically we’ve been a band for 7 years (since 2009) and we’ve released some seven inches with different people but we never had an album.

During the last three years we just went on tour, so there really was never any time…..we recorded the album in between two tours.

During the tour we met Suicide Squeeze from Seattle and they came to our show.

They liked it and they said: “You know we’ll put out your album!” So….. that’s what happened…..

Musically speaking, what is the inspiration of the album? is there a theme that connects all the songs?

Yeah, well I guess I would say there is!

A lot of the songs were written after a breakup….there are love songs or heartbreak songs or whatever you want to call them…..

When we started as a band we never thought that we were going to have an album…. We just wrote different songs  together and we were just playing….. we didn’t know even if we were going to get a show and didn’t have a band name.

So, you know, a lot of the songs on the album are the songs that we had written when we started….

Now it is different, we finally feel like a band….. We are going to write a new album in the future and….I think the last one helped us to develop the process of songwriting and having things or concepts while before that’s just something that we never really thought about.

Let’s talk about lyrics again, which is your  favorite verse of one of your songs?

I’ve never really thought about that…..it’s hard to think about one in particular…..

I think that GET LOST is lyrically maybe one of my (Sade) favorite songs because I think there’s kind of a double meaning which I really like.

I Want to give to the songs a little bit of mystery in a way that people can relate to the lyrics, but also have the freedom to interpret them however they want.

What is your favorite song?

(Irita) Heart of Darkness…. this is probably my favorite one…….from our first EP

You said that you’ve been on the road quite a lot ….yesterday you were in Switzerland, today you are in Paris (Le Batofar) and then……?

We’re going to Lyon tomorrow and then we go to the U.K. for like a week….London, Glasgow, Bristol,

We tour a lot!

What inspired the song Feel Alright?

You know, when you have passed that moment where you finally feel like you’re getting over it and you feel like saying…I can do this….

Tell us about the video of Get Lost….

Get Lost is one of our favorite songs ….the video is shot on a very interesting place in California.

It used to be a place for vacation, but I guess when they were moving the Colorado River they flooded it and made a lake……that just doesn’t go anywhere….. It doesn’t drain and the salt levels are so high that killed all fish it’s full of bones everywhere.

This was a big holiday place…..it used to be like Palm Springs…. you could have fun with boats or jet skis , but now is not pretty at all!

Who produced your album?

It is something that we have in mind for our next album, we would like to find a great producer

Are you already working on new material for a new album?

Yes, we have some songs we are working on ( one of them they played at the end of their show in Le Batofar) and we are going to work on them once we will be back in LA!

Usually I (Sade) write a part of the song and I send it to the rest of the band….they start to jam on it and write their own parts…..then we come all together to practice.