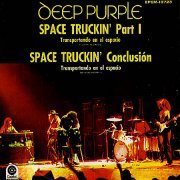 Did you know? Deep Purple is a title of a song that the grandmother of Richie Blackmore (guitarist of the band till 1975) was used to play at the piano.

The band selected it as their stage name even if they were attracted also by another one: “Concrete God”

Luckily they choose Deep Purple and the first album called “Shades of Deep Purple” was released one year after, with not big results in terms of sales.

Deep Purple is now considered one of the founding bands of the modern Hard Rock and Heavy Metal together with Black Sabbath and Led Zeppelin.

The lineup of the band went through several changes; the most famous one was the one featuring Ian Gillan (vocals), Ritchie Blackmore (guitar), Roger Glover (bass), Jon Lord (keyboards), and Ian Paice (drums).

Today’s song is called “Space Trukin extracted from the album Machine Head that, despite being the most successful album of the band, is also the one that has the most interesting story.

The album was recorded using the mobile recording studio of Rolling Stones (the same used for Exile album) at Montreux Casino in Switzerland famous because it had performances of Led Zeppelin, Pink Floyd and Black Sabbath.

The lyrics of the song “Smoke on the Water “will describe the band’s experience in Montreux, after that they saw the casino on fire after a concert of Frank Zappa.

Going back to “Space truckin” the song lyrics talk about an adventure in the space, where astronaut are dancing and crazy things are happening.

It looks like a psicadelic trip in the space more than an adventure and it reflects a year, 1972, full of experiments for the band.