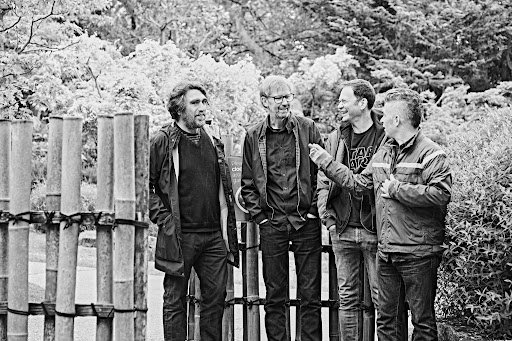 rockyourlyricsSeptember 4, 20210 views
News0 views 03 min read
Five years since the departure of one of pop’s ultimate Starman, the London quartet are releasing a beautiful new single which reflects not just on Bowie, but on the blackhole he has left in all of our universes since. Stream it HERE.
As Shirley Lee of Spearmint explains:
“”Since Bowie Died” isn’t about David Bowie – it’s about the rest of us. I remember hearing the news at the start of 2016: it didn’t seem real. Then as things came to pass that ear and since, I felt like our world had become a harsher place from that moment on, as though it had ‘opened the floodgates’. I know others felt the same way, so we wanted to capture this feeling in the song, but add some hope too.”
Produced by Rhodri Marsden (Scritti Politti), the lush, string-laden track offers a feeling of melancholic reminiscence akin to The Beatles’ classic “Eleanor Rigby”, yet sealed with Spearmint’s trademark flavour. At little over the 2’ mark, it’s a potent, poignant hit of warmly sentimental social observation that will strike a chord with just about any Bowie fan who’s felt anything but hunky dory since his passing.

Available digitally and as a 7” single, “Since Bowie Died” is backed with the b-side “Wonders of the World”, a love song written in the lockdown of recent months about “finding out which things really matter to you”. “It was very nearly on the album” says Shirley, “but it got bumped off by another song at the last minute, but it’s a favourite of the band.”
“Since Bowie Died” is lifted from Spearmint’s upcoming album ‘Holland Park’, where Bowie’s legacy is something of a recurrent theme throughout. Released on 17 September 2021, the album is a loose concept record of-sorts that finds the band’s Shirley Lee reflecting on Bowie, but also his father; a musician in a 70s rock band who never quite had his ‘Ziggy’ moment. As Shirley recounts: “They never made it, and there’s nothing online about them, so it’s down to us to tell the story.” With contributions from Rhodri Marsden (who also produced) and Andy Lewis (Paul Weller), it’s a record that captures the band’s classic sound at its very best and an album they feel is their best yet..
Often referred to as ‘Britain’s best kept secret’, Spearmint have been making great records for a couple of decades now: this will be their ninth album proper. Still the same line-up: Shirley Lee (singing, guitar), Simon Calnan (singing, keyboards), James Parsons (guitar, bass) and Ronan Larvor (drums). This album will be the 57th release on their own hitBACK label.
Spearmint plan to premiere the album live in London in November, followed by shows in Brighton and Bristol, with further gigs being planned for 2022.
Spearmint’s new single “Since Bowie Died” is available digitally and physically from 3 September 2021.