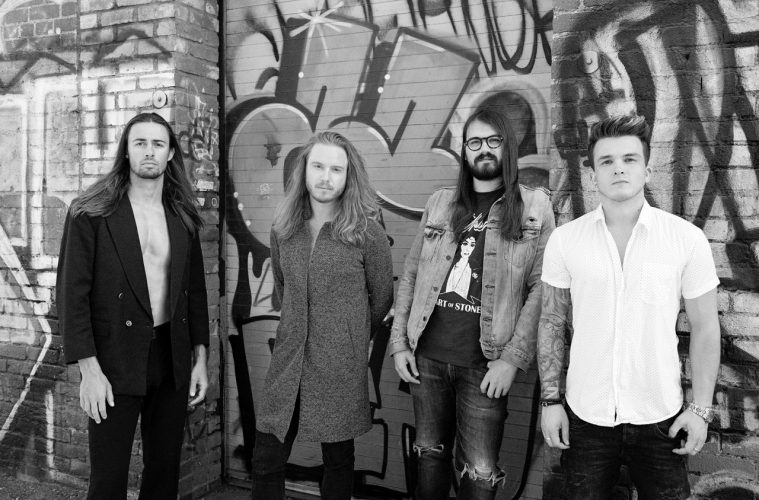 How do you usually write the lyrics of your songs?
Trev: Jules tends to find the initial subject of the song of what he might be going through at the time or even what will happen to him. Channeling some things ahead spiritually. Jules really takes the reigns here but I’ll sit with him and throw some lines out that shape the story a little more. Jules will just keeping throwing things out there and I’ll help narrow down some words and lines to find the right hook. It really comes together quick because we’ll write 2-4 songs in a night. Josh has been involved in the newer songs lyrically as well.

We are all starting to speak together. It’s killer.

Jules: I definitely love that our individual voices are gradually merging into one. It’s been so easy to write from a place of truth thus far. I think the best thing to do is to live your life 100% so you can pull from your own experiences and create from that place.

In your opinion, what is the most important thing in songwriting?
Trev: Hooks are most important. Great music and melodies are key, but hooks are the orgasms of songs.

Are you ever scared of revealing aspects of your personal life/experience to strangers through your music?
Jules: That’s what vulnerability is all about. It can get scary sometimes but I believe the best songs come from a place of truth.

It’s crazy that even a fictional story has so much hidden secrets that reveal themselves later on. It’s happened to me with songs like “Holehearted” and “Just A Man“. The songs we write tend to come from real life experience, or they tend to come to life as we record and perform them.

What is the best lyric that you ever wrote (the most meaningful for you)?
Jules: It’s a tough one. Each new song brings that feeling of release and self reflection. I remember feeling so good after Trev and I finished writing our ballad “Let Me In Again”. It really is like therapy when you write about your own life. It’s a magical thing.

My newest favorite lyrically speaking is a song called “Inside”. It’s about the ambivalence of a new love. Wondering how the other person feels… is it real? Is it gonna last… “reading between the lines, chasing meaning on your lips… talk is cheaper than it’s ever been… here we are playing games in the dark, giving up in the light, gimme more, keeping score, is it fate? Is it love? Is it ever enough?”.

The lyrics of this song came out like a stream of water from the source.

What inspired “Special”, your latest song?
Trev: I had the music for “Special” floating around for a while and Jules would go into the melodies he was feeling and we would always smile and vibe with it hard, but never really solidified anything yet. While we were recording the EP, “Special” was not one of the songs we initially planned to record. In between recording “Can’t Get Over Your Sex” we started messing around with what would become “Special” again.

Jules had been going through a confusing time with a girl he was seeing so he came up with the meaning real quick.

When we had the chorus down, I thought we should give a little f#@k you and add a post chorus of the second chorus of saying there’s nothing really special about you.

We all laughed and were vibing that because in all of our opinions and having our bros back, it was true.

Jules: Yes, ever since Trev came up with the guitar riff, I had some melodies floating around, especially the chorus and hook melody. What’s funny is that originally, I was singing “there’s something really special ‘bout you”.

But things changed along the way and we decided to flip the meaning around when in the studio.

It’s nothing against the person who inspired the song, it was more about me ranting and moving on. Again, some kind of therapy session, fueled by red wine and heavy rock/funk riffs.

Do you remember the day you wrote “Holehearted”?

Jules: It was such a flow around the dinner table. What’s crazy is that I felt like all the lyrics were placeholders aside from the song titles and some chorus lyrics.

But it worked so well we kept it as such. Later on the two songs came to life, the “fictional” lyrics turned into words off of an imaginary diary. That’s why I gotta be careful about what I write about!!! If any fans ever want to buy me a beer, make sure it’s a strong IPA, double or triple IPA preferred.

Is there a link/a common theme among the songs of the new album?
Jules: Yes, they are all related to this one relationship I was in. More like a summer fling, but oh so powerful… it jump started my fire inside and well… the music speaks for itself. I’m grateful for it all.

What is the best suggestion your producer gave you?
Trev: Going back to an answer of an early question, we weren’t initially gonna record Special because at the time, we didn’t have it fully written or arranged by the band yet. Justin and Dusty (Heartbeats) heard us jamming it and said that we should record “Special” instead of a song called “No One Else” which is still a killer song that we will record eventually.

That was the best suggestion we got from them no doubt. We are thankful for that now.

What are your plans for 2019?
Jules: Releasing more music, touring and making a name for ourselves. I’m personally excited to travel the world playing our music to our fans!!