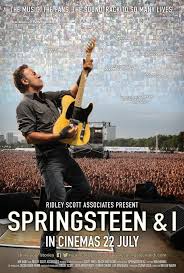 “Springsteen & I” is not only a documentary about the relationship between Bruce and his fans, but it is also a way to show that music is really changing the life of a lot of people.

Thousands of fans answered to the request of Baillie Walsh (the director) and his production team of sending him the most various videos featuring their life influenced somehow by the Boss.

The result is a documentary of more than two hours where, people of all ages, are sharing with the viewer their most intimate stories; some of them are involving directly Springsteen, some of them are just life experiences influenced by his music.

Watching the documentary, you will have a lot of fun in discovering, for instance,  who was behind the crazy Elvis that jumped on stage in Philadelphia, the good looking british girl that “danced in the dark” with Bruce, the guy that just got dumped by his girlfriend and many more

At the same time you will learn a lot of stories of ordinary life, characterised by problems, challenges and, sometimes, sadness.

The songs of Springsteen have the power to motivate people and help them in the moments of difficulties….why? Mainly because Bruce is considered “one of them”, as a man is saying, he is a “local legend”.

His songs (that many times we described in our website) are talking about the life of ordinary men and women….. is for that reason that many persons are recognising themselves in the lyrics and use them, as an additional gear, in difficult moments.

For more information on the movie you can visit the documentary’s website @ http://www.springsteenandi.com

The movie Bruce Springsteen & I has been released 22nd july 2013 by Black Dog Films, directed by Baillie Walsh and produced by Ridley Scott.