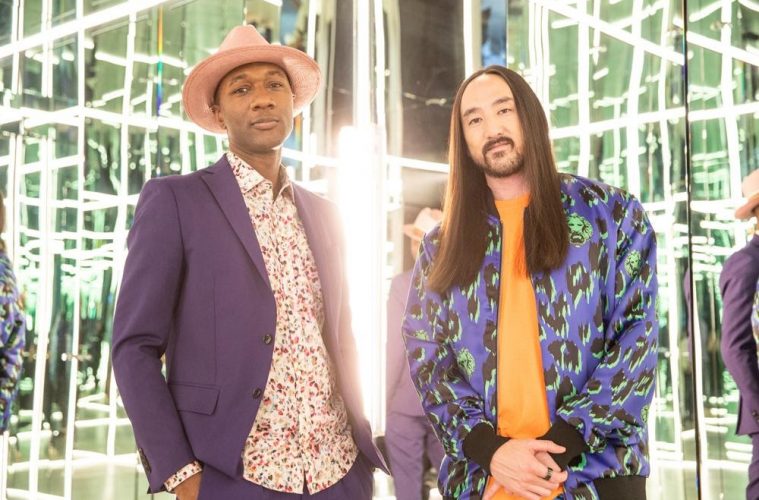 rockyourlyricsDecember 23, 20200 views
News0 views 14 min read
2x-Grammy-nominated producer/DJ and artist Steve Aoki unites with platinum-selling singer, songwriter, producer and activist Aloe Blacc on the motivational anthem to close out 2020, “My Way.” The new work is the first official collaboration between Aoki and Blacc. It arrives as the world reflects on the past and prepares to enter a new year. Stream it HERE.
Blacc’s uplifting lyrics speak to maintaining optimism and faith through trying times: “I can make it through this / You can throw the world in my face / But the fear gives me life / And I swear ’til I die I’m gonna do it my way.” The message is accentuated by Aoki’s upbeat synth melodies and dynamic backbeat, blending seamlessly with Blacc’s soulful touch.
“I’m so excited for my track with Aloe to finally be out in the world and to be able to share it with all of you,” shares Steve Aoki. “He has an incredible voice & it’s been awesome getting to work with him and blending my signature sound with his.”
“My Way is such an anthem,” shares Aloe Blacc. “I knew Steve could take it to the next level! This song is the perfect way to ring in the new year.”
Counting nearly 3 billion music streams to his name, Steve Aoki is a true visionary. Billboard described the 2x-GRAMMY-Nominated artist/DJ/producer and Dim Mak Records founder as “one of the most in-demand entertainers in the world.” As a solo artist, Aoki boasts a lauded cross-genre discography that includes 7 studio albums and collaborations with Lil Uzi Vert, Maluma, BTS, Linkin Park and Louis Tomlinson amongst others. In 1996, he established Dim Mak out of his college dorm room, a trendsetting record label, events/lifestyle company and apparel brand. It has served as a launch pad for global acts like The Chainsmokers, Bloc Party, The Bloody Beetroots, and The Kills, in addition to being the home of early releases from acts such as ZEDD and Diplo. As a nightlife impresario, Aoki’s legendary Hollywood club night Dim Mak Tuesdays hosted early performances from future superstars such as Kid Cudi, Daft Punk, Lady Gaga, and Travis Scott. A true renaissance man, Steve Aoki is also a fashion designer, author and entrepreneur. In 2012, he founded THE AOKI FOUNDATION, which primarily supports organizations in the field of brain science research with a specific focus on regenerative medicine and brain preservation. In addition, Aoki has pushed his clothing line Dim Mak Collection to new heights, both with original designs and collaborations with everyone from A Bathing Ape to the Bruce Lee estate. Aoki’s multi-faceted journey is chronicled through the Grammy-nominated Netflix documentary ‘I’ll Sleep When I’m Dead‘ (2016) and his memoir ‘BLUE: The Color of Noise‘ (2019). In the summer of 2020, Aoki unveiled his Latin music imprint, Dim Mak En Fuego, continuing to break down musical and cultural boundaries ‘by any means necessary.’
Aloe Blacc is a singer, songwriter, producer, and activist born to Panamanian immigrants who settled in California. From the crossover hit “I Need a Dollar” to the chart-toppers “Wake Me Up,” “SOS” and “The Man,” Aloe has stamped his name on the music scene globally. Spanning several albums and cross-genre collaborations with producers such as Avicii, David Guetta, Tiësto and Zedd, Blacc’s multidirectional sound has evolved to occupy a unique pocket that reflects the long and beautiful history of American soul. Through timeless, descriptive songwriting Blacc speaks to the broad range of human experience, from platonic love to love for humanity, from politics to aspiration. Versatile and compassionate, his songwriting is classic in a way that makes categorization irrelevant; indeed, Blacc’s lyrics have been paired with dance music and country — always to stirring effect. ‘All Love Everything,’ his latest album, is the singer-songwriter’s first collection of material written as a father, a journey that has expanded Blacc’s already heartfelt artistic palette. Generous and warm, ‘All Love Everything‘ draws on soul, folk, and contemporary pop, reminding listeners that there’s no pigeonholing the human experience. “Becoming a father made me want to share those experiences in music,” he says, admitting it’s a challenge to translate such a powerful thing into lyrics and melody. But the listeners who have followed Blacc over the course of his career know that his facility with language and sound is deep — if anyone was up to the task, it’s him.