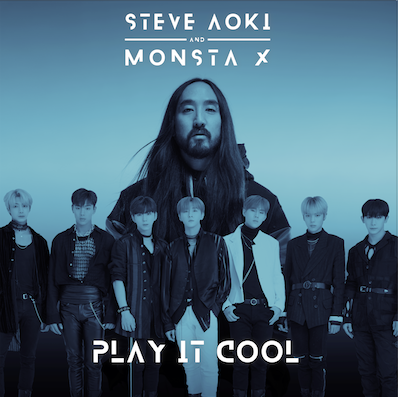 The bouncy piano keys and punchy beat provide the foundation for Aoki’s iconic electro-pop sound, paired with Aoki’s use of Monsta X’s voices to create texture and build the track as a whole. The initial chorus proclaims “And when you’re dancin’ in my face, I just play it cool”, followed by the lyrics “I love the way that you came over here” repeated over & over again in an edited sped-up hook that is impossible to get out of your head. Steve says, “their [Monsta X]  voices dive into your soul”, so it’s no surprise that he would utilize their singing as a fundamental motif and driving force, outside of the vocal leads.

“Monsta X is one of those powerhouse groups that sets the bar very high,” stated Aoki. “Their voices stay with you long after the song is over, and on this track they sang so profoundly that all we had to do was focus on the story we were telling. I really believe in today’s world that we have redefined what love and relationships look like, so I think that this song is one that many people can relate to.”

“It was such an honor to work with Steve Aoki. He is truly an amazing artist and producer. We love how ‘Play It Cool’ turned out at the end so much that we included it in our recent album – Take 2 ‘We Are Here’!” said Monsta X. “After the great success of the Korean version, we can’t wait to see the responses to the English version from all over the world. This collab is a gift from us to our ‘monbebe’ , for always taking care of us and keeping it cool. Thank you.”

Outside of this new collab with Steve, Monsta X has also announced a world tour beginning in April. The band will be traveling all the way from South Korea to California throughout the course of their performances. The band’s latest album, Take.2‘We Are Here,’ debuted at #5 on Billboard’s World Albums Chart for the week of March 2, 2019; and has been causing an unstoppable wave of interest with notable mentions in the media. On top of that, the band is currently set to perform as the first K-pop group at the iHeartRadio Music Festival out in Las Vegas on September 21st, 2019.