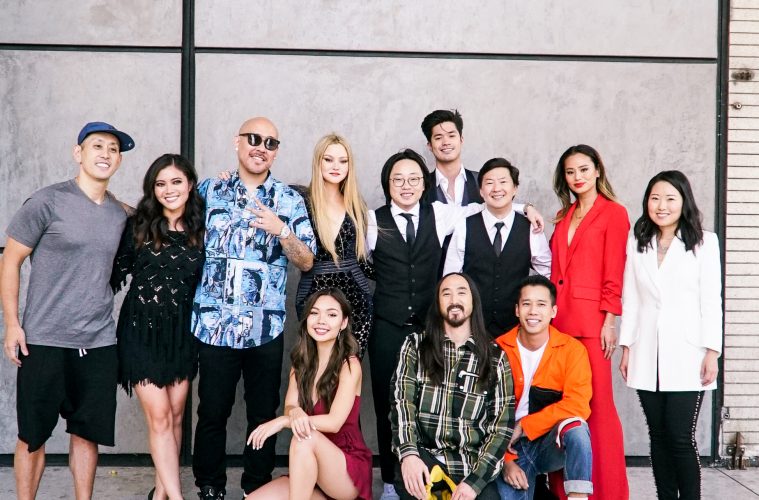 rockyourlyricsNovember 19, 20180 views
News0 views 07 min read
Today, two-time Grammy-nominated DJ and Producer Steve Aoki released his music video for hit single “Waste It On Me” featuring BTS. The track which appeared on Aoki’s newest installment of the neon future series, Neon Future III, has amassed praise domestically and internationally, debuting at #1 in more than 60 countries with 4 million streams in the first 24 hours, as well as the #1 worldwide trend on Twitter with 1k+ retweets per minute.

The highly anticipated music video for “Waste It On Me” with a knockout all Asian-American cast and director, featuring stars such as Ross Butler from 13 Reasons Why, Ken Jeong from Crazy Rich Asians and The Hangover, Devon Aoki from Sin City 2, and many more – a true triumph for Asian representation in mainstream media, and a star-studded showcase of talent. The video begins with a shot of Aoki and his crew entering a nightclub with the owner played by Jamie Chung and Ben Baller, followed by Ross Butler who is on a steamy date with Devon Aoki. The viewer is then taken to a hopelessly in love Ken Jeong, whose character is a waiter at the club where he fawns over Devon, his next customer. As Jeong daydreams of winning a sing-off against Butler and sweeping Devon off her feet, in turn, the video goes back-and-forth with clips of Steve DJing and cameos of clubgoers doing karaoke Leonardo Nam, Vincent Rodriguez, Jimmy Yang, Jessica Lu, and more.
The director, Joe Hahn, who is best known as the DJ for Linkin Park, brings a modern and charismatic visual style to the overall sonic concept of the song; why waste your time on someone who doesn’t care, when you could be with someone who will offer you so much more? The music video is a comedic, light-hearted, feel-good journey that will leave you hitting replay.
“When I found out that  ‘Waste It On Me’ was the number one song in the world on Apple Music I realized that this track represented more than just me and BTS,” said Aoki. “It’s bigger than music and we hope to show other Asians they are also apart of the global commercial musical landscape. I feel so deeply about the Asian footprint in music culture that I wanted the music video to have an entirely Asian cast and director. The video tells the story of “Waste It On Me” in an incredibly funny, witty, and clever manner. I want to give a big shoutout to all the incredible actors and people who made this video happen: Joe Hahn, Jessica Lu, Ben Baller, Devon Aoki, Jimmy Yang, Ross Butler, Ken Jeong, Jamie Chung, Jinny Chung, Jared Eng, Steve Aoki, Tiffany Ma, and everyone else. Please watch and enjoy the music video.“
“I absolutely loved working on this video,” said Jeong. “It’s so cool to be apart of the number one song…in the WORLD. It’s even cooler that I’m working with my friends, a stellar all Asian-American crew in front of and behind the camera.”
“Steve Aoki is an icon and I was so pumped when he asked me to be a part of this video he put together,” said Butler. “We had hung out a couple months before the video shoot and I got to get an inside look into how creative and driven he was and immediately, we agreed we had to collaborate on something, anything. The whole process was just flat out fun, can’t wait to work with the Aoki family again. Fingers crossed.”
“I’m so excited to be a part of this video for my big brother Steve,” said Devon. “It was a lot of fun shooting with an all Asian cast and celebrating what it means to be Asian American. It felt really good being there together as a group, representing our backgrounds as well as what makes us unique. I love my brother and it means the world for me to stand beside him—I will always be there to support him and of course to remind him where we come from…AOKI FAM!”
“I’m thrilled that I got a chance to be a part of this music video,” said Chung. “We are continuing the celebration of Asian Americans.”
“Waste It On Me,” which graced the Billboard Hot 100 chart last week, marks Aoki’s fifth time on the Top 10, and BTS’ first time on the Hot Dance/Electronic Songs chart. The track garnered praise globally and amassed 20+ million streams on Spotify in less than two weeks. “Waste It On Me” is the third project BTS and Steve have collaborated on and is the second hit to be listed on the Hot 100, following the Steve Aoki remix of BTS’ “MIC Drop” featuring Desiigner.