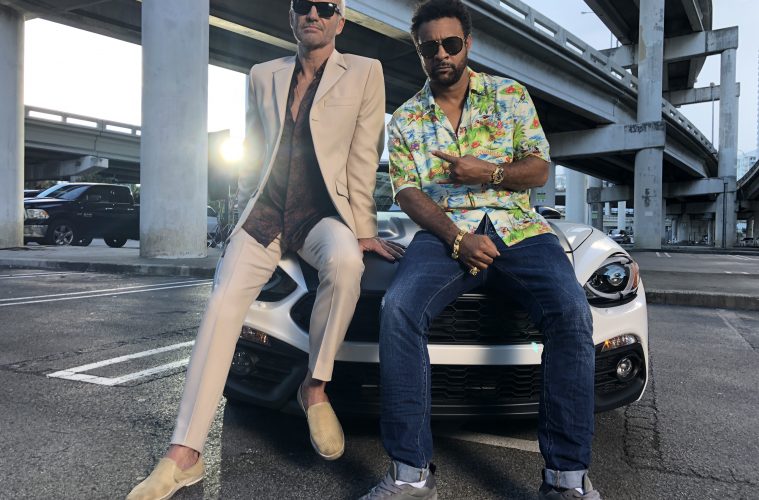 Sting and Shaggy are excited to unleash the official video for ‘Gotta Get Back My Baby’ today featuring Golden Globe-nominated actor Steven Bauer (Scarface/Breaking Bad) and directed by Michael Garcia. The track appears on Sting & Shaggy’s collaborative UK Top Ten hit album 44/876 (Polydor Records). Set in Miami and inspired by the hilarity and hijinks of classic buddy-cop TV shows and films, the light-hearted video sees the pair playing detectives reporting to their police Captain (Bauer) and partnering up for a host of frenzied action and stunts on a mission to find Roxy, a dangerous fugitive, in an exhilarating visual that encapsulates the spirit of the duo’s compelling and dynamic partnership.On the coming together of the track, Sting explains; “The voices here are very unique. Shaggy’s voice could only be Shaggy, and I think I could only be me. It’s a surprising collaboration, and as we know, surprise is the most important thing.”Shaggy also adds; “It was a song that was written a while back. I played it for Sting and he loved it and I said we should really put this song on the album!’ Once his voice came on it, it just lifted the track. It really came to life. It has this power.”On the opportunity to work alongside the charismatic pair, actor Steven Bauer says; “The thing about working with Sting and Shaggy, for me, was that it was extremely fun because they already have something going that’s very good,  and very natural.”

The track, co-produced by Teflon (Wyclef Jean, Fat Joe, Ruff Ryders) and Martin Kierszenbaum (Sting, Mylène Farmer, Lady Gaga), appears on Sting and Shaggy’s island-inspired album, 44/876 (Polydor Records), which debuted at #1 in Germany, has spent sixteen weeks atop Billboard’s Reggae chart in the US and has reached Gold status in both France and Poland.In creating 44/876, Sting and Shaggy drew from the many surprising connections at the heart of their music. With its title referencing their home country codes, 44/876 first and foremost honors the duo’s love for Jamaica: Shaggy’s homeland, and the place where Sting penned such classics as The Police’s “Every Breath You Take.” Hailed “one of the most anticipated concerts of the year” and “a reggae rock dance party that never lets up,” Sting & Shaggy are currently on the road with their 44/876 Tour in North America, before heading to South America in October and Eastern Europe in November. For complete tour itinerary, please visit: www.sting.com/tour. In April of this year, Sting & Shaggy made UK headlines with a memorable performance of ‘Don’t Make Me Wait’ at Queen Elizabeth’s 92nd birthday celebration at the Royal Albert Hall. The track also featured on their collaborative Top Ten album release. The pair also performed the track live on BBC’s The One Show, and in the latest series of Mrs. Browns Boys.While in the US, Sting is currently at No. 1 on Billboard’s Hot R&B/Hip-Hop Songs chart and No. 2 on Billboard’s Hot 100 with Juice WRLD’s “Lucid Dreams” which samples “Shape of My Heart,” written by 16-time Grammy Award winner, Sting and his longtime guitarist, Dominic Miller.