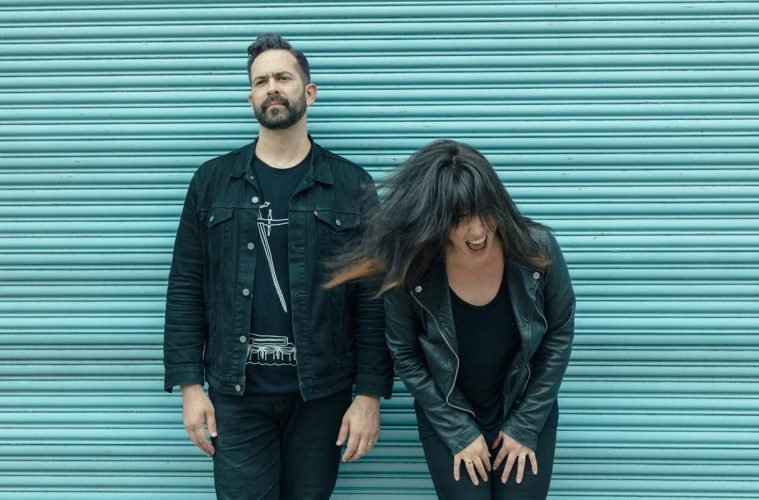 “Whatever & Ever” looks at our dissatisfaction with living in a perpetual stream of apocalyptic news, unsolicited opinions, and curated personal brands. Recorded in Los Angeles with Eric Palmquist (Wavves, Night Riots), the song asks if the empty dopamine hit from each new notification is making us ‘dumber / or maybe just distracted’ and makes the case for resignedly dancing through the end times. With synthesizers glitching & gurgling beneath him, A. Gomez’ wounded baritone invites us to consider the possibility that nobody was ever in charge & the party is winding down. NRVS LVRS have also announced a west coast tour which kicked off on March 8th in Reno at The Loving Cup. All upcoming shows are listed below.

NRVS LVRS (pronounced “Nervous Lovers”) is the dreamy darkwave project of husband & wife duo Andrew Gomez and Bevin Fernandez. While citing acts like Massive Attack, Can, and Kate Bush as influences, their music flirts with caustic electro-pop elements similar to that of The Knife, Bat for Lashes, or Crystal Castles. The dulcet tones of Fernandez’ soaring vocals complimented by Gomez’ low crooning glide over layers of ominous synths, driving guitar, and precise percussion to create compelling electronic soundscapes.

San Francisco natives, Gomez and Fernandez —recording as NRVS LVRS since 2014— can be found offstage crate digging at Amoeba, cheering on the Warriors, and supporting the Bay Area art scene. The pair has debuted in 2015 with ‘The Golden West‘ LP on Breakup Records. NRVS LVRS has since opened for acts like Jagwar Ma and Telekinesis.