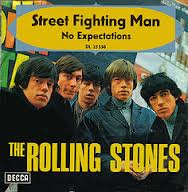 Did you know that Street Fighting Man is one of the most favourite song of Keith Richards and Charlie Watts?

It was 1968 when the band released this song as part of the album “Beggars Banquet”, but the initial title was very different than the one that made this song so successful; in fact it was titled “Did everyone pay their dues?”

The lyrics, at the beginning, have been written by Mick Jagger alone, talking about brutal parents, while later changed in to their final version.

Those years were extremely unstable from a political perspective, and young people were on the streets fighting against the System.

Paris, London, Milan…all the major european cities were protagonist of one of the most important social change of the century.

From here the title : Street Fighting Man, dedicated to all of them and inspired from a demonstration against Vietnam war in Grosvenor’s Square in London.

Mick Jagger lyrics have been re-adapted and a precious contribution on them was given by Keith Richards.

They talk about  a sleepy London, a Revolution to be organised  and playing in a rock n roll band…