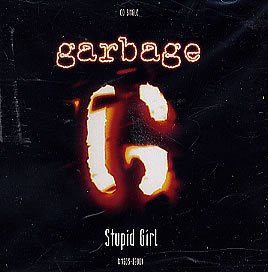 What is happening when you mix Scottish blood with American one?

What is happening when a young singer from Scotland flies over Madison in Wisconsin and meets with three American musicians?

We don’t know if this will happen all the time but we are sure the multicultural experience helped a lot the sound of the band that was created in 1994 by Shirley Manson (the singer),Butch Vig (drums) , Steve Marker (keyboard and guitar) and Duke Erikson ( bass and keyboard).

The band’s first album is dated 1995 and called “Garbage”, after that , during the years , they released four additional studio albumss, the  last one in 2012 called “ Not Your Kind of People”.

Out of this album we suggest you to hear to “Blood for Poppies” , the first single released out of the album that was written thinking about how difficult is to stay sane in a world that goes totally in a different direction.

“Stupid Girl” is one of the major successes of Garbage, it has been released together with their first album.

The song has been written by Shirley and it talks about being woman and indipendent, a girl that doesn’t take no as an answer and that will go straight for what she wants.

Later the band said that, the same ideas, could apply also to a man……. It could have been called “Stupid Boy” with no so much difference.

We, personally love the verses “ A millions lies to yourself is all you ever had” and “All you had you wasted”………do you think they do speak about the same thing? Well, we are not so sure…….. maybe is just a contrast between all the good,genuine, things she lost and the fake,artificial things she had to do in order to survive in this society.