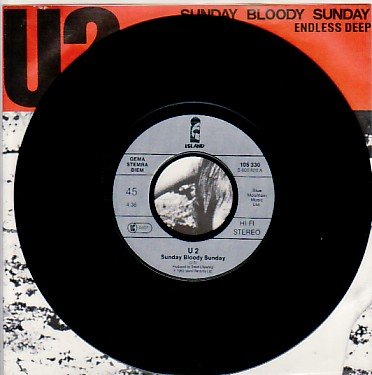 We did write already about U2 , do you remember?

We talked about PRIDE, IN THE NAME OF LOVE, one of the most famous song of the band https://rockyourlyrics.com/pride-in-the-name-of-love-u2.

Today we will talk about another song:  Sunday Bloody Sunday a song that is about LOVE again and not POLITICS as the majority of the people might think.

U2 was formed 1976 by four members: Bono (guitar and vocals) The Edge (guitar), Adam Clayton (base guitar) and Larry Mullen Junior (drums).

The band originally started from the post punk rock of Dublin (if you want some insight on their beginning please read the book “Killing Bono” by Neil McCormik) but their sound is very melodic  and their lyrics are talking about love, personal stories and politics ( but always related to peace).

Bono wrote it, almost in one hour; his thoughts were inspired from the tragedy that happened in Ireland, in the city of LondonDerry,ten years before, the 30th of september 1972.

That day, during a demonstration made by the Irish, the british army decided to shot on the people killing 14 of them.

Bono wanted not to create a song full of hate for the British, he just wanted to say : let’s work all together in order that episodes like this will not happen again in the future.

Sunday Bloody Sunday is a song of PEACE of HARMONY between nations, between people that live so close one to the other.

Bono sang it the first time in public during a concert in Belfast before the release of WAR.

Before singing the song Bono said: “this song speaks about us, speak about Ireland, but, if you will not like it, we will not sing it again”

Well, it seems that they liked it, and we like it a lot