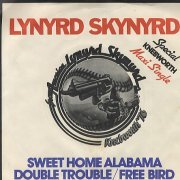 “Sweet Home Alabama” was written as an answer to two songs, “Southern Man” and “Alabama” by Neil Young, which dealt with themes of racism and slavery in the American South.

“We thought Neil was shooting all the ducks in order to kill one or two,” said Ronnie Van Zant at the time.The following extract shows the Neil Young mention in the song:

Well, I heard Mister Young sing about her

Well, I heard ole Neil put her down

A Southern man don’t need him around anyhow

Van Zant’s other response was also controversial, with references to Alabama Governor George Wallace (a noted supporter of segregation) and the Watergate scandal:

In Birmingham, they love the governor (boo boo boo)

Now we all did what we could do

Now Watergate does not bother me

Does your conscience bother you?

Where the skies are so blue and the governor’s true

Music historians point out that the choice of Birmingham in connection with the governor (rather than the capital Montgomery) is significant for the controversy as “In 1963, the city was the site of massive civil rights activism, as thousands of demonstrators led by Martin Luther King, Jr. sought to desegregate downtown businesses…[and] was the scene of some of the most violent moments of the Civil Rights Movement. Segregationist police chief Bull Connor unleashed attack dogs and high-pressure water cannons against peaceful marchers, including women and children; just weeks later, Ku Klux Klansmen bombed a black church, killing four little girls.”

In 1975, Van Zant said: “The lyrics about the governor of Alabama were misunderstood. The general public didn’t notice the words ‘Boo! Boo! Boo!’ after that particular line, and the media picked up only on the reference to the people loving the governor.”

“The line ‘We all did what we could do’ is sort of ambiguous,” Al Kooper notes. “‘We tried to get Wallace out of there’ is how I always thought of it.” Journalist Al Swenson argues that the song is more complex than it is sometimes given credit for, suggesting that it only looks like an endorsement of Wallace.”Wallace and I have very little in common,” Van Zant himself said, “I don’t like what he says about colored people.”

Music historians examining the juxtaposition of invoking Nixon and Watergate after Wallace and Birmingham note that one reading of the lyrics is an “attack against the liberals who were so outraged at Nixon’s conduct” while others interpret it regionally “the band was speaking for the entire South, saying to northerners, we’re not judging you as ordinary citizens for the failures of your leaders in Watergate; don’t judge all of us as individuals for the racial problems of southern society”.

In his 2012 autobiography “Waging Heavy Peace” Neil Young commented on the controversy writing “I don’t like my words when I listen to it. They are accusatory and condescending, not fully thought out, and too easy to misconstrue”

This article uses material from the Wikipedia article <a href=”http://en.wikipedia.org/wiki/Sweet_Home_Alabama, which is released under the <a href=”http://creativecommons.org/licenses/by-sa/3.0/“>Creative Commons Attribution-Share-Alike License 3.0</a>.