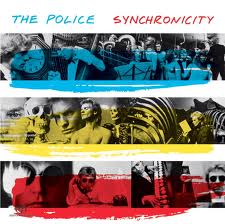 Synchronicity II is, in our opinion, the most complicate song in terms of lyrics made by the Police.

Written in 1983 and released together with the album “Synchronicity” the song didn’t reach the top of the charts, but is widely considered among the biggest success of the band.

Many sources are saying that this song was inspired by the poem “The Second Coming” by William Butler Yeats that talks about the end of one civilisation and the rise of something else, something bigger and wilder.

In the same way this song talks about two main thing: the desperate life of a father that has no satisfaction at home (where the grandmother is mentally ill and the wife attempts suicide) and as well at work where is mistreated by his boss.

At the same time something is happening, far from him…..the monster of Loch Ness, arises in the surface of the lake.

A parallel situation is created, the monster represents the father distress and pain, that arises from the water.

Why the title synchronicity? Because everything happens with a sense, the life isn’t chaos, the things are happening and interconnected between them