Tales of Interest – Interview with The Dopamines

Tell us more about your new album “Tales of Interest”….

Well, I know that saying that it’s my favorite record we’ve ever done doesn’t carry a lot of weight because every band’s favorite record is the one they’re working on NOW or the last thing they put out.

But in all seriousness the journey of this record, which started in 2012, has been the most rewarding.

Overall, the record is snippets of our interests, experiences and influences from 2012-2016.

A lot has happened in our personal lives during that time period. And a lot of our musical influences evolved as well.

Even though we didn’t make any big leaps outside of our typical style, we definitely pushed some new buttons to see what we could get away with, what we could activate that we haven’t yet.

Is there a link, lyrically speaking, between all the songs?

I suppose so. I definitely wasn’t trying to build a big narrative or arc but when the dust settled on all the lyrics, there was definitely more of a theme sticking out than in the past. And maybe a lot of that comes from the fact that we had 5 years to reflect on a lot of what I wrote.

I wrote lyrics for a lot of this shit as I was putting down the demos, so big chunks of lyrics were written across that entire span. It wasn’t all written in 2016. Michael Jon and Josh all had access to all the lyrics as they were written, so we were able to be a bit more critical on what was working and what wasn’t.

We weren’t actively trying to wrap our heads around those early lyrics, but it definitely rolled over into whatever direction I went for lyrics thereafter.

Overall [lyrically] I think the record is about just wanting to bring a period of time to an end. Bring it all to the surface, good and bad, and just shed it and move forward. Whatever the f##k that means.

How do you usually write your lyrics?

The starting point really depends on whatever melody is clacking around in my head. If a melody feels more like a chorus than a verse, I’ll start there (or vice versa).

From there it’s just about jotting thoughts/words/sentences down in a loose arrangement, not necessarily condensing the writing to the cadence of a melody right away.

I can pretty much discern s##t like “this verse is probably going to be 5 lines” or whatever, so that’s about as far as i’ll box myself in.

From there, I’ll try to condense and tweak the lines to fit the melody. Most of the time that doesn’t work so from here it’s a battle to convey the narrative in a way that tells as much of the story as possible within the [usually very few] amount of syllables the melody will allow.

This is my absolute favorite part because i’ll go down just about any path to reach even just one word that will fit perfectly in a lyric.

But I really enjoy doing it this way because usually during the search for one thing, I end up finding a whole new [and better] way to frame what i’m trying to say.

And I end up with a lot of mental dog ears for other songs.

When it was last time you wrote some verses?

For the Dopamines, the last thing I wrote was the lyrics for “Common Rue”.

I wrote them in like 10 minutes in the apartment above the studio, while Jon was working on his bass parts.

I’ve never written lyrics last minute like that. I always have most of the lyrics worked out before we enter the studio.

It was a stressful exercise but it worked out, I love how they turned out. Not something i’d like to make a habit out of.

It’s hard to say what it actually means to me, but I can confidently say that without it, I would feel like I lost a limb.

There was a point, in 2011, where I kind of had to put up or shut up professionally.

I went to school for Architecture, graduated in 2007. I got a job, and then the economy collapsed in 2008 and I was laid off and kind of left with nowhere to go.

It was the perfect time for The Dopamines. The ball was picking up speed for us as a band so we went all in on it from 2009 to 2011.

The economy kind of inched its way back up over time, and eventually there was a place for me again in Architecture.

But no company would go all in on me, so I wouldn’t go all in either. I would work for a bit, and just up and go on a tour, and hope i could get my job back when I came home.

It actually worked for a while, but then it just became too stressful. So the song is about the journey of that, pulling myself in both directions.

It’s more or less a statement about using personal experience to shape your own moral compass, and not necessarily straight from a book or an authoritative figure(s).

My upbringing was very much in a world where religion was the path to becoming a well rounded person.

I have zero will toward my upbringing, and I fully support those that positively use religion or any pre-conceived ideas to craft their morality.

But no one is exempt from mistakes or failure or tragedy.

No book or ethos can protect you from everyday life.

To be unwilling to learn from or write off empirical experience seems weird to me.

So yeah there’s my soapbox answer! The title is my son’s 21st birthday.

So it’s kind of a message to him in the future, if I die early or join a cult or whatever.

Do you remember the day you wrote “open letter”?

It started out as a song about myself, like a “looking in the mirror” kind of thing.

But I hit a wall and couldn’t finish it. I came back to it in December with fresh eyes and it just came together.

The lyrics made more sense as an indictment on bands who just phone it in when writing mew music.

It’s kind of an unfair statement to declare though, really.

You know, just because I don’t like some band’s new material doesn’t mean they didn’t work hard on it.

Just like there’s probably a handful of people who think i’m just cutting big logs of shit on paper, it’s all subjective.

But yeah, I definitely wrote it about a particular person, and I think only the band knows? The band and Gordy from Frenzal Rhomb.

I think that’s it.

Anyway after the song was recorded, and we were listening to mixes at Jon Weiner’s bar (Northside Yacht Club), Jon sincerely asked me if I wrote the song about him.

I laughed and assured him it wasn’t. I felt bad. I mean, he couldn’t have been carrying that feeling for that long thankfully, but still. 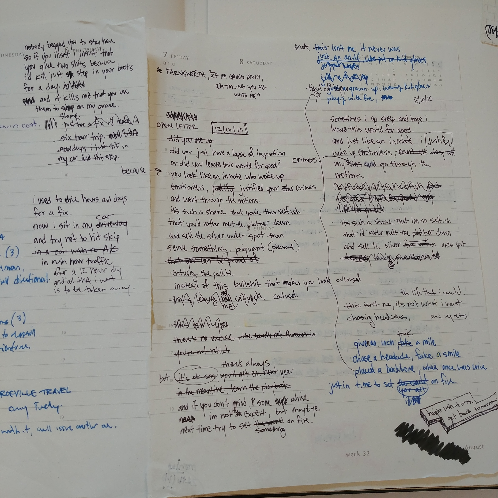 Are you planning to be on tour soon?

We are definitely planning it.

We want to get to UK pretty bad, so that’s high on the priority list. We have a few other potential opportunities next year, we’re playing the waiting game on that.

We don’t have a lot of time to tour, because we all have our own lives and responsibilities outside of this dumb ass band.

So we try to be pretty certain on plans before we make them.

What is your biggest dream?

To make music and art my living. Pretty empty dream, but that’s what they’re for yeah?