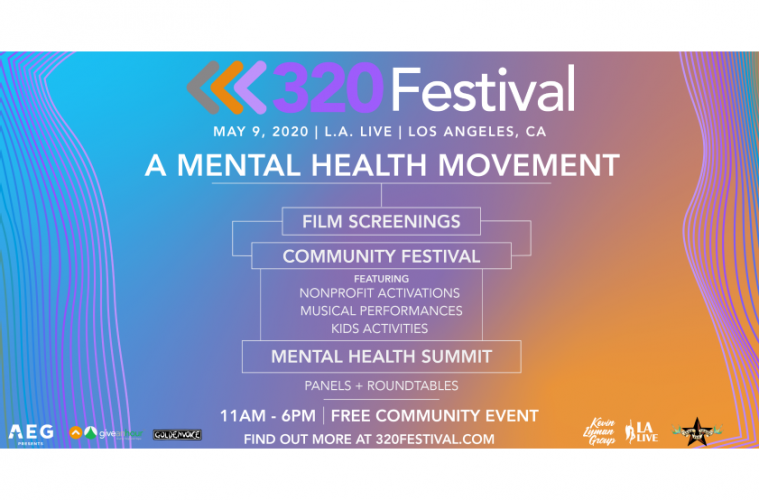 In an effort to change the way we talk about mental health within our communities, Kevin Lyman (Founder of the Vans Warped Tour, USC Professor, and CEO of the Kevin Lyman Group and Unite the United) and Talinda Bennington (Chester Bennington of Linkin Park’s Widow) have announced the first ever 320 Festival, taking place May 9th at L.A. LIVE. With the support of the Kevin Lyman Group, a class of USC Thornton School of Music Students, Goldenvoice, AEG, L.A. LIVE this is set to be a one-of-a-kind community event.

320 Festival’s mission is to help bring awareness to the importance of our mental health and provide attendees the resources they need to better care for their emotional well-being and the well-being of those they love. This one-day festival will feature a Community Festival, Film Festival, Mental Health Summit and Benefit Concert. 10,000 people throughout the day will join together in making a change. The 320 Festival will be run through the Unite the United Foundation and 100% of the net proceeds will be donated to participating official 320 Festival nonprofits.

“The idea for 320 was born out of my personal experience and the recognition that we can do better to address the needs of those who are suffering with mental health concerns and addiction,” shares 320 Changes Direction founder Talinda Bennington.

“For 13 years I watched my husband Chester struggle with depression and substance use. I often felt scared and alone. I was uneducated about the challenges he faced and I wanted information – but finding answers to my questions and available help for our family was very difficult. We need to change the culture of mental health so that those in need – and their family members – are able to speak openly about their struggles so that they can seek the care they deserve.” 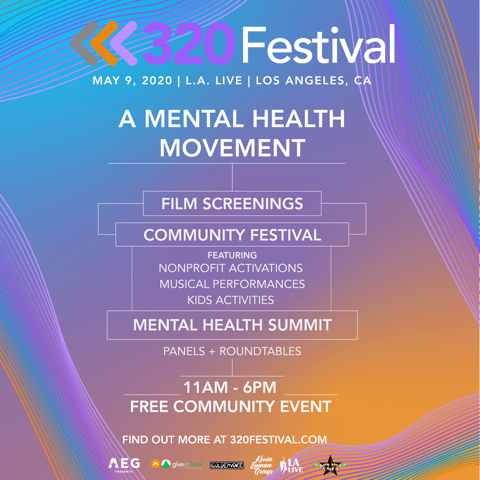 The 320 Festival will feature a free daytime community festival taking over the XBOX Plaza at L.A. LIVE with over 30 non-profit partners, live performances from artists including Bruce Wiegner, Dylan Dunlap, Rouxx, Evaride, Holy Wars, Vaines, X.ARI, Atarah Valentine, Blue Midnight and more to be announced. A full list of nonprofit and community festival partners is available at 320Festival.com.

Taking place at The Novo and The Terrace at L.A. LIVE, the free Mental Health Summit will feature numerous panels and round table discussions surrounding topics like Criminalizing Mental Illness, Prevention Resources, Social Media and the Age of Anxiety, Entertainment Industry and Mental Health, Human Sustainability in the Food and Beverage Community, Youth of America and more. There will also be safe spaces with access to free, licensed therapists for all attendees.

There will also be a free film festival at Regal Theater featuring movies, short films and documentaries that tackle various mental health topics. This will also mark the LA premiere of Blue October’s documentary Get Back Up, which chronicles frontman Justin Furstenfeld’s struggle with mental illness and addiction.

For much of the budding success of Blue October, Furstenfeld was able to hide his addiction though the band was falling apart. His mental illness battle, however, was apparent through many of his dark lyrics found on Blue October songs, something he’s struggled with since a teenager. Get Back Up not only details his side, but the battles faced by loved ones as well.

“I never thought I’d have the opportunity to be a part of something so special and important as this 320 Festival event,” said Justin Furstenfeld, Blue October. “Recovery saved my life. Not only have I found the peace and confidence that I was searching for, but I’ve been given the chance to share my experience, strength and hope with the world. To be asked to attend this function feels like I’m achieving a goal way beyond my own reach and I thank 320 for allowing me into its world”.

The night will conclude with a very special ticketed Benefit Show called Songs That Saved My Life at The Novo. Artists will come together for a night unlike any other to deliver once in a lifetime performances for fans. The lineup for the benefit show will be revealed at tonight’s 320 Conversations event.

Tonight, Talinda and Kevin will be joined by host Ken Jeong at USC’s Bovard Auditorium for 320 Conversations. Panelists Tiffany Jenkins (Juggling The Jenkins), Morgan Freed (Emo Nite LA Creative Director and Co-Founder), Jason Docton (CEO of Rise Above The Disorder) and Erin Raftery Ryan (Executive Director of NAMI Westside Los Angeles) will come together for an engaging & thought-provoking conversation about mental health, as well as the official announcement for the 320 Festival Benefit Show Lineup. The evening will also feature a special performance from Justin Furstenfeld of Blue October. Tune in for the full live-streamed event on the 320 Festival Facebook page.

Kevin Lyman expressed, “It is a true honor to be involved with the 320 Festival, honoring the legacy of Chester Bennington and bringing together so many wonderful organizations in the mental health and resource space together. It has always been a belief of mine that it if you empower today’s youth and create experiences where a community can have fun and come together it will create a melting pot for true societal change. The 320 Festival embodies that thinking.”

For more information on 320 Festival, please head to www.320Festival.com.