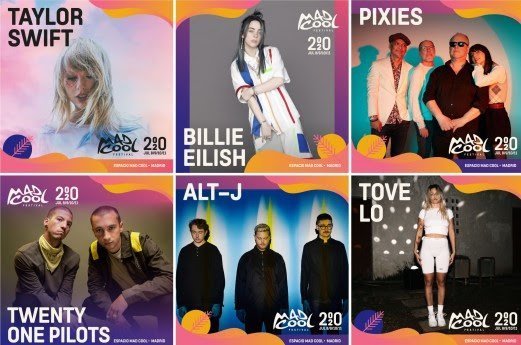 The countdown for Mad Cool Festival 2020 has already begun. Taylor Swift, Billie Eilish, Twenty One Pilots, Pixies, Alt-J and Tove Lo are the first six names on the 5th anniversary line-up of the Madrid-based festival. A line-up that is transversal and one of a kind, that promotes talent in all of its forms and musical quality.

Superstar Taylor Swift will be performing at her first concert in Spain after a nine year absence, and will do so as the headliner for Mad Cool 2020. At 29 years of age, the singer, songwriter and producer is one of the most influential and respected artists of our time. With millions of sold albums, hundreds of awards, and a never-ending list of hits, Taylor Swift is a true star, and Mad Cool 2020 will be the perfect opportunity to exclusively enjoy her spectacular act.

The second big confirmation for Mad Cool 2020 is the global phenomenon of Billie Eilish. At just 17 years of age, the teen-star has broken all previous records. The American singer and songwriter has managed to connect with an entire generation thanks to her style, which is just as unclassifiable as it is enigmatic. The star of the moment will be blessing Mad Cool Festival with her only concert in Spain for 2020.

For their part, Twenty One Pilots surprised the world with the release of “Blurryface” (2015), an album that sold a whopping 7 million copies and earned the duo their first Grammy award. Three years later, Tyler Joseph and Josh Dun would be in the spotlight again with the release of “Trench” (2018), which established them as one of the greatest bands in the world. Mad Cool Festival will provide the only opportunity to see them in Spain in 2020.

But the line-up for Mad Cool 2020 has much more to offer than just modern sounds; the legendary Pixies will also be joining the party. The band made up of Black Francis, Joey Santiago and David Lovering (with the recent addition of Paz Lenchantin) is one of the most influential groups in the history of rock. Their home-made sound has set the cornerstone for indie, grunge and alternative rock over the past 40 years, and their legacy can be traced back to groups such as Nirvana, Pearl Jam and Smashing Pumpkins. And yes, also exclusively in Spain thanks to the Mad Cool Festival.

And Mad Cool Festival will also be the appointment of the year with the Spanish public for Alt-J. The British trio formed by Joe Newman, Gus Unger-Hamilton and Thom Green will once again make the Madrid public vibrate as they did, precisely three years ago, at Mad Cool. With three albums to their credit – “An Awesome Wave” (2012), “This Is All Yours” (2014) and “RELAXER” (2017), the group has earned the respect of critics and legions of fans alike with their unique sound.

And to complete the announcement is Swedish singer and songwriter Tove Lo, an artist with a unique blend of electronic rhythms, catchy melodies and confessional lyrics. Defined as the “darker Swedish pop export,” Tove Lo has no inhibitions when it comes to exposing her political and feminist opinions. Also on the Mad Cool Festival stage in the Valdebebas space.

Mad Cool 2020 is bound to be a spectacular and memorable festival, unique and global – you can’t miss out. It’s where you’re supposed to be: an unparalleled experience.

Stay tuned to our social media. More surprises are just around the corner!