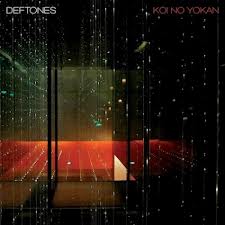 “Koi No Yokan” is the title of the seventh studio album of Deftones.

It can be possibly translated as knowledge one has that he/she is going to fall in love with another person.

This differs from the idea “love at first sight” in that it does not imply that the feeling of love exists, rather it refers to the knowledge that a future love is inevitable)

From this album today we selected the song “Tempest”, published as second single in 2012.

A ‘Tempest’ is a violent disturbance, so to change our present and our future; it is about that future that the lyrics are talking about……the supposed end of the world that would have occurred on December 21, 2012, according to various myths related to the Mayan calendar ( named as “ancient arrival”)