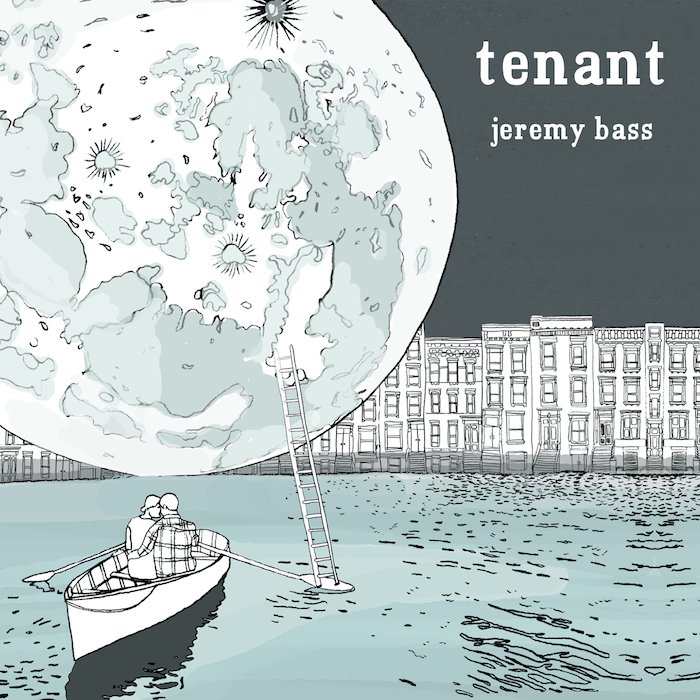 RYL: Your album “Tenant” will be released in few weeks, how was its preparation? We heard it has taken few years…

My producer and the owner of MoBro, Matthew Vitti, laid down drum tracks. Then we sent them off to session musicians in Los Angeles and Brooklyn to lay down bass and keys, then there were more sessions in Bridgeport to track electric guitars, banjo, mandolin and backing vocals.

Finally, we recorded strings at a church in rural Connecticut, pedal steel at a home studio in Santa Barbara, and accordion at a makeshift apartment studio in the East Village. So, yeah, it took a little while to get off the ground.

JEREMY BASS: I love playing “Grey Days.” It’s tricky to keep the intricate acoustic guitar part going while I sing, but I always love a challenge.

JEREMY BASS: The songs on Tenant are all taken from different songwriting periods over the course of 7 or 8 years, so they tend to be pretty distinct. I think they all have to do with living in a city, with love and loss, our hopes and our dreams.

JEREMY BASS: I usually come up with guitar riffs and chords first—while I’m doing that, some snippet of a thought or a catch-phrase will come along and assert itself.

At the same time, I tend to make up nonsense words and syllables and then start to fill them in based on what sounds the best rhythmically, or by what matches up to the main phrase. Usually at that point, I try to center in on what the song might be about, what story it wants to tell, what its emotional base might be.

Then I try to figure out: what do I want to say? what lyrical idea do I want to put out into the universe? But each song is different—I can only really tell you how I wrote one particular song, there’s no set pattern.

RYL: Where did you learn to play guitar? Do you remember the first one you ever owned?

JEREMY BASS: I grew up studying classical music, so my approach to the guitar was very formal. I started on a small nylon string guitar, learning how to read music on each of the six strings, then across pairs of strings, until finally I was playing melodies in counterpoint.

It was a quick jump from there to classical guitar, but before I got really serious with that I dove into folk music on a hand-me-down acoustic steel-string guitar, and rock music on a black Squire Stratocaster hooked up to a crappy little Fender amp.

They all, to different degrees, have stayed with me.

RYL: Tell us everything about the song “The Thief’s Song”

JEREMY BASS: That’s a really personal song, actually. I wrote it as an apology to my ex-wife (back before we were married) after we’d had our first full-blown fight. It worked—at least in the short term! My favorite part about that song lyrically is that I was able, in the second verse, to connect it to something beyond myself:

“In olden tales that you might read / There is a maid, a thief, and a nobleman on his steed. / That silly prince, in his iron bed, / Do you think you could love a lonely thief instead?”

It gives what would otherwise be a solely personal song some outward resonance, something historical and lyrical beyond the self that helps the purely emotional-relationship language speak more deeply.

I’ve become more and more interested in cross-pollination and the ways I can subtly complicate an existing premise the more I write.

RYL: “Gone” it is our favorite song, how did you write it?

JEREMY BASS: The main riff and vocal hook came to me, as many songs have, as I was walking down the street. I repeated it like mad to keep it in my head until I got home.

That song basically wrote itself, but I spent years going back over the lyrics to the second and third verses until they finally fit the right way.

I started the song before I met my ex-wife, and finished it after we had divorced, so it kind of bookends that relationship in an unexpected way. It certainly wasn’t about her when I started it!

RYL: Will you be on tour soon promoting the album?

JEREMY BASS: I have an album release show coming up in New York City, at Rockwood Music Hall, on Tuesday, October 7th (at 8pm). Later that month I’ll be promoting the album in Los Angeles, and will probably do some smaller tours in the Northeast. But most of my time right now is dedicated to recording and producing two new EPs that will drop early next year, one in the winter and one in the spring.

JEREMY BASS: The second verse from “The Thief’s Song”:

There is a maid, a thief, and a nobleman on his steed.

That silly prince, in his iron bed—

Do you think you could love a lonely thief instead?

Who’d steal your heart, who’d do you wrong?

Who’d write a love-song just to have you sing along?

Who’s hung his head, in grief and shame,

And’s ready now to take the moral and the blame.

RYL: Tell us about “Almost Empty” what inspired it?

JEREMY BASS: There’s this funny phenomenon in New York City toward the end of winter when the weather starts to warm up a little but is still far from what anyone would consider warm.

People come in droves to sit out at the outdoor cafes after hibernating all winter, and invariably they all get doused in freezing cold rain and have to move inside.

I was one of those idiots one April 1st, but decided to try and sit outside under the awning and finish my wine while the rain rolled across the avenues. It inspired a poem, one about my mother who had just died suddenly, but it turned into a song later that night. Thankfully, I should add—it’s a much better song than it is a poem.