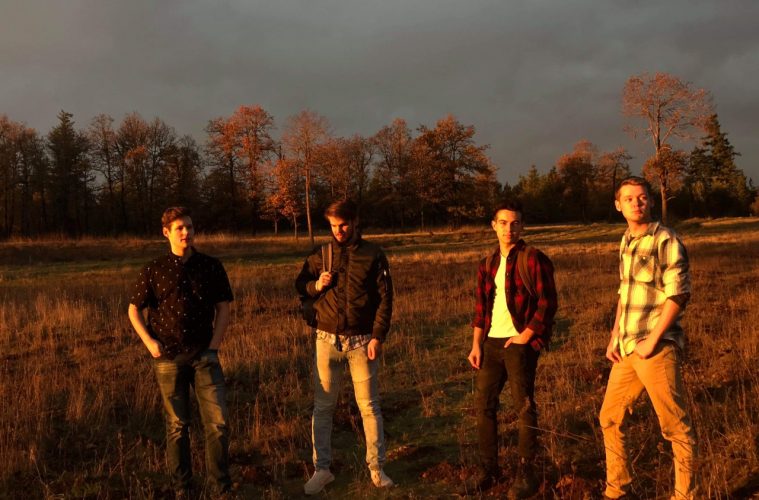 It varies from person to person, Dawson (Lead vocals) and I (Eli, Bass) are the primary writers, and both have different methods. Dawson will usually start with writing chords and a melody first, then fitting words to that melody. I on the other hand do the reverse, fitting music to lyrics I’ve already written. As far as inspiration for the lyrics, we both like to look to experiences we’ve had, and ways we’ve felt that people can relate to.

To find the balance between being too direct, and being so vague or metaphoric that any meaningful interpretation is lost. The best songs are just vague enough to be applied to multiple similar situations, but clear enough that it still comments on those situations.

Yes, and that’s something we touched on in our most recent album. It’s framed as a character telling a story on an interview show; in the segment towards the end he reveals that he altered details in the story to make himself look better in the end, as if he finally has his life together. We follow that up with a brutally honest song, “Love, Fear, and Failure”, that speaks on how we all still have trials that we have to work though.

In addition to that, one of my songs, “Fant Yadult”, was a bit nerve-racking to put out. The meaning takes a bit of digging to find, but ultimately its about my insecurities that I will never find actual love in life, just cheap substitutes. I knew I needed to put it out there though, because it’s a question that plagues many young people.

A line out of “Tent City” is a favourite of mine: “But since it is harder to act than to sing / I’ll continue to sit on my throne.”

At first glance the song is about homelessness in our home city of Portland, but on a deeper level its about hypocrisy. As people, and particularly artists, we like to talk a lot about the problems we see in the world, and argue about what to do. But in that bickering we (myself included) often stall to take actual action against the problem.

We decided to self title the album, for a number of reasons. First being that it is the story of us over the last two years of our lives. Although all the songs are from the perspective of one character, he documents recent experiences that all four of us have had. Secondly, a big theme throughout the album is what it’s like in the middle of a struggle, yearning for the other side. That “dark before the dawn” theme is something you also find in the biblical Easter story, with Good Friday being the darkest day before the brightest dawn.

Do you remember the day you wrote “You Were Gone”?

I wrote that song at one of my lowest points, where I was very unsure of what the future held for me. Kept up late at night by depression, anxiety, and complete loneliness, I found myself staring into the bathroom mirror when I broke down crying. The band seemed to have hit a wall, and school was giving me constant anxiety. They were sucking the passion from everything in my life and whittling me down to nothing. I felt aimless, like God had abandoned me. I’m a Christian, and the song is written from a place where I was very angry at God. Things later got better, and I was unsure if I wanted to make such a bold statement written from a place I had moved passed. But I decided in the end that honesty and authenticity are important, and I believe people who may be in the same place I was can connect better to our album because of that honesty.

Yes, all the songs tell one continuous story, primarily about the struggles and trials many of us face as we come into adulthood and search for identity.

When we write, we love to pack a song full of as many cool parts as we can fit in. Our producer Jason did wonders for the album, he really helped us to identify the ideas that work best, and focus on those.

This year we’ve been touring all around the states, and in about a week and a half we will continue with our Fall tour! We’ve been from Washington and Oregon all the way to Florida and back, and are just trying to introduce our music to as many new people as possible. We are also working on music videos for many of our songs when we have time, at the moment we are having a friend of a friend animate a video for our song “Painting The World”.