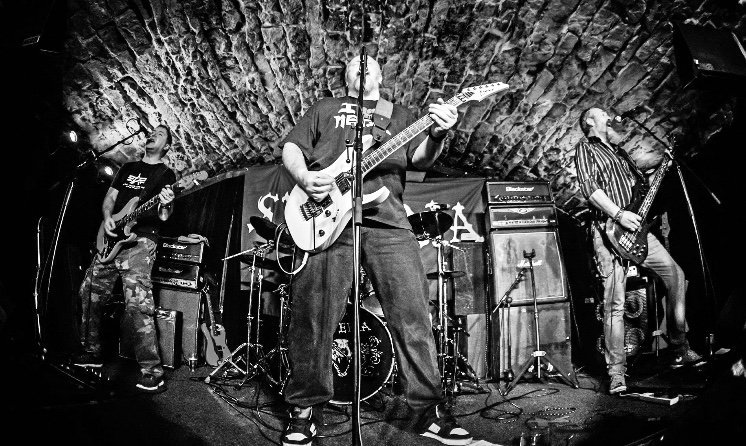 We usually always write the songs based on real events either from the news, newspapers or online news stories. They tend to always be real events. There’s always the odd one that’s written for fun, but generally they all reflect some event that has happened.

Write the song with riff, melody line and percussion all together. A lot of rock bands write music by forming all the music to completion then asking the singer to fit a melody line and lyrics over what’s already written. This can really make the song too busy, doing it altogether allows the song to have space and time to listen to what’s being sung.

It’s not a topic that’s come up before. I don’t write songs about me, so never been an issue.

That’s a tough one for me to answer, let’s see. There’s a couple. The song Terror Eyes chorus is:- “Terror Eyes the only terror eyes can see”. That’s just a play on the word terrorise. The other one is probably from the song Man In Black which is based on the Hungerford Massacre in 1986. Where a guy called Michael Ryan shot 16 people dead. The lyric line is “Mother, Mother can you see me looking down the barrel with only one choice” this is based on him turning the gun on himself. He said the what happened to his mother was a mistake even though he shot her several times.

What inspired “Cryin’”, part of your latest album/EP “Terror Eyes The Anthology”?

This song tells the story of Ruth Ellis, the last woman to be hung in the UK. It’s a love story between Ellis, Blakely and Cussons. How she ended up shooting Blakely outside a night club, being interviewed by police without a lawyer and then being hung for the crime.

Do you remember the day you wrote “Man In Black”?

I didn’t write this just after the massacre it was a few months after it, once all the news stories were out and the background to what happened to the victims and Ryan were made available. There was a lot of info came out and ended up being to much for the song, so you change the song to being based on what happened rather than being a true story.

I don’t think so other than they are generally being based on true events.

Don’t listen to me.

Gigs and gigs and gigs for what left of 2019, some festivals being announced for 2020 tho which is great.