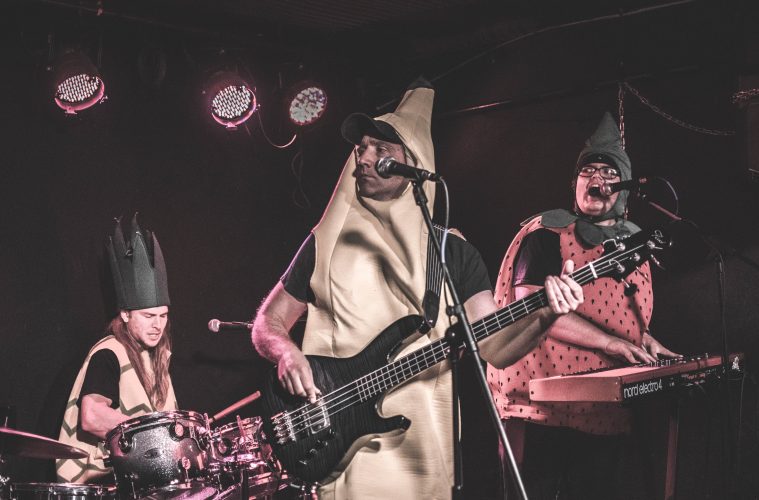 How do you usually write the lyrics of your songs?
Sweet (The Banana): Ninety Five percent of the time you write music first, which comes from a cool beat. Then you write the music, then a melody, and THEN you write the words that fit the emotional quality you’re trying to achieve. Sometimes the lyrics come first, but then you just work in reverse.

In your opinion, what is the most important thing in songwriting?
Juicy (The Strawberry): For our songwriting we focus on making sure the songs are as entertaining as possible. We craft  every beat, lyric, and melody so it has something for everyone. It’s important to us.

Are you ever scared of revealing aspects of your personal life/experience to strangers through your music?
N’ (Nefertitipharoahsandramundusifilopilis the Pineapple): We’re all fruit! There’s not much to explore further than that. I guess we could sing about being fruit, but that’s kind of on the nose as it goes.

What is the best lyric that you ever wrote (the most meaningful for you)?
Sweet: The lyric that people most often know at our shows is from our song Inconceivable: “Drink a couple drinks and smoke a couple puffs, you know what I’m saying- let’s get funked up!”. It’s clear in that moment that we just want everybody to have a good time.

What inspired “No Rox” from your latest album/EP “The Adventures of Sweet N’ Juicy”?
Juicy: We wanted to write a song about partying and savouring our primal instincts. We figured if we sent our fans home with a positive disposition towards these things they’d get into some memorable mischief.

And “The Adventures of Sweet N’ Juicy”?
N’: It’s our origin story! Sweet was a banana by himself, then he met juicy, then they found me!

Do you remember the day you wrote “Simple Things”?
Juicy: Sure do! We were in N’s basement writing new tunes, and Sweet showed me this cool piano riff he came up with. The rest of the music wrote itself in like, less than half an hour.

Sweet: The lyrics came later over a few weeks. Eventually it all came together.

Is there a link/a common theme among the songs of the new album?
N’: Heck yes there is! All the songs are about having a good time.

What is the best suggestion your producer gave you?
Sweet: We self-produced the record. We’re fruits, not schizophrenics.

What are your plans for 2020?
Juicy: We have a few tours in the works. In February we’re doing a West Coast Tour-

Sweet: N’ gets to visit his momma pineapple.

Juicy: AND in April we’re going to Montana through Eastern Washington. We have a few weddings, we’re releasing some videos, etcetera, etcetera. Lots of cool stuff.


To conclude the interview a short Q/A session, please answer the first thing that comes to your mind: