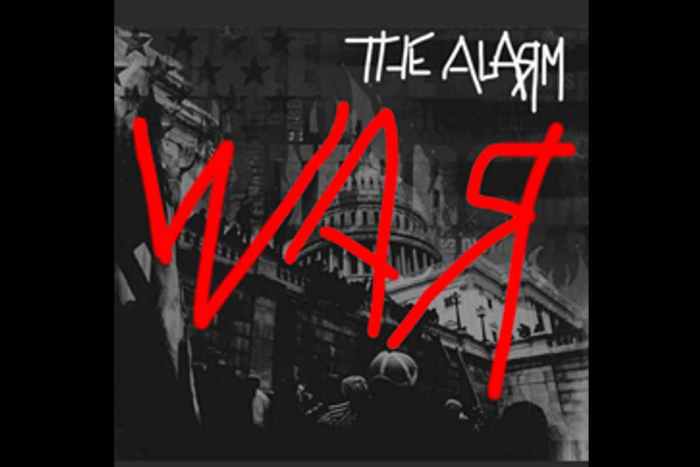 The Alarm To Release New Album WITHOUT The Music!

The Alarm’s brand-new album ‘War’ has to be completed by February 24th 2021 in order to be serviced around the world at midnight on February 25th/26th via the world’s digital music suppliers. In order to combat production times and to have physical product available immediately, the band is advance-releasing the album (without music) in a special CD-Rom format. Fans will then burn their own copy of the finished record. The album’s writing and recording creative process only commenced on 7th January 2021, but the band promises finished tracks will be sent electronically to fans once the final mix and mastering process has taken place.

‘War’ is also available to pre-order as a hand-cut vinyl LP which will be released to fans on February 25th, Alarm lead vocalist/guitarist Mike Peters‘ birthday.

Mike, The Alarm & producer George Williams, are currently writing and recording the record from scratch using their own isolation studios. Mike’s wife, Jules Jones Peters has been documenting the recording process and creating a very incisive fly on the wall vision of Mike Peters and The Alarm at work, sharing regular videos online at www.thealarm.com

“The record is really starting to take shape”, says band frontman Mike. “The responsive nature of the writing and recording situation has given rise to some radical thinking on how to instantly release the album into the modern world and also across all the major formats – stream, download, CD and LP.”

To release the album on vinyl, a specialist cutting-house has been engaged to hand-cut as many pre-ordered vinyl copies as possible, once the final master has been cut in Los Angeles by the legendary Howie Weinberg (Howie mastered The Alarm’s 2019 album ∑ Sigma, which entered the UK Rock Chart at No.1).

The digital edition of ‘War’ is being distributed internationally by InGrooves who have already paved the way for this groundbreaking release to appear on all digital service provider platforms on February 26th.

As the artwork has been created in advance, each CD/LP will also have the album title and band logo painted onto the cover by Mike Peters personally, with the tracklisting left intentionally blank so that fans can write in the song titles themselves, once they receive the completed work.

“I really want the fans to have access to this album as soon as it’s finished”, continues Mike. “We have set ourselves a very tight deadline, and the music is already being created out in the open for all to see and hear. The technology is there so that fans who still have access to a CD burner and wish to get involved in the spirit of the project can do so by interacting with the creative process and play their own part in bringing this new Alarm album into the world.”

The Alarm – ‘War’ is available to order/pre-save now exclusively via www.thealarm.com