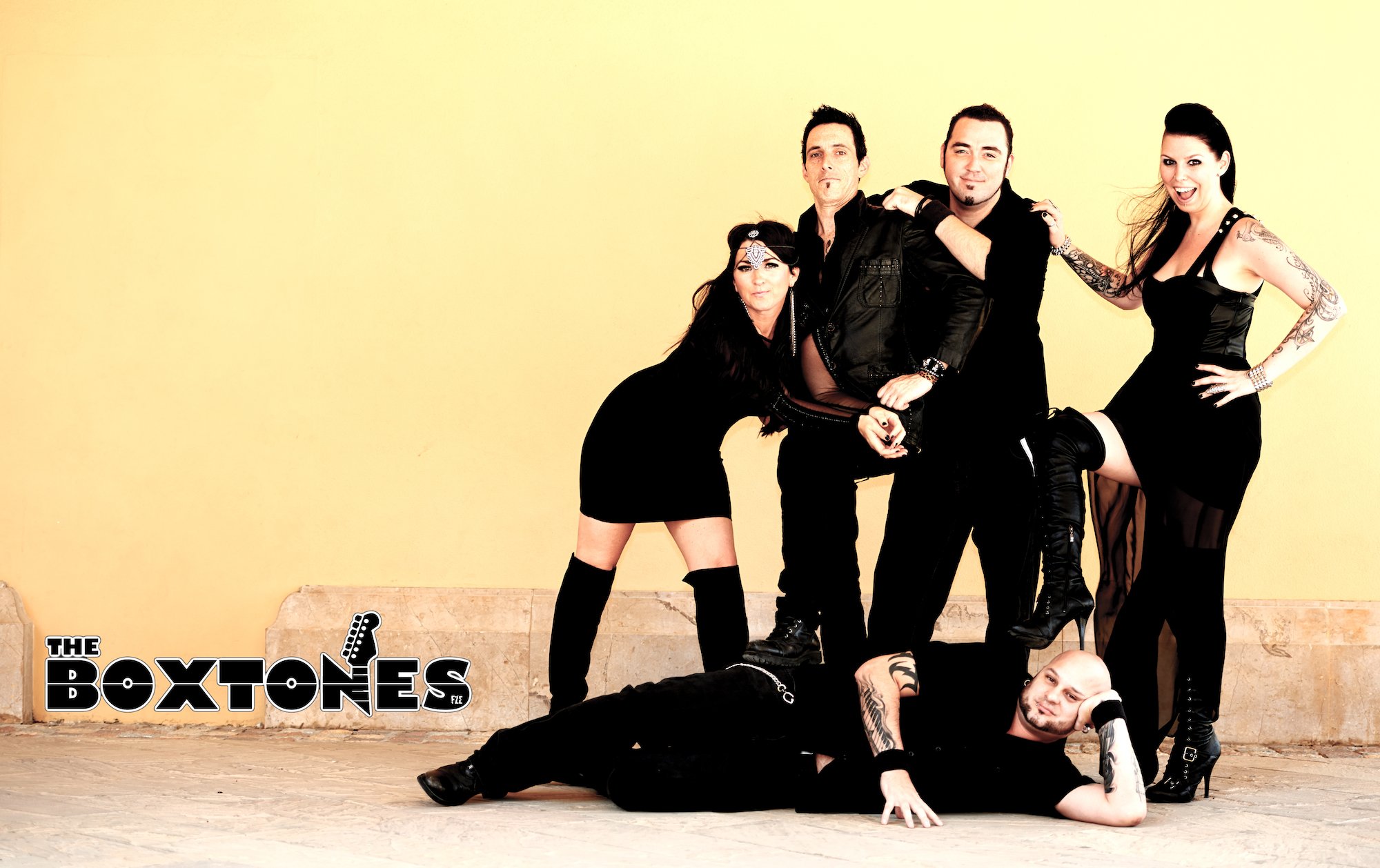 A lot of projects on the pipeline for The Boxtones; not only a new album, but also a project of touring across Europe, Canada and Middle East.

Waiting to see if their dream of opening for Rolling Stones in february will be realised, they answered to our questions.

RYL:  Your new album “In the pockets of clowns” is set to be released very soon, we imagine you are very excited about it…… can you define it for us in one word?

RYL: Pick three songs from it that better represent you  ….. why?

Boxtones: The most popular song from the public so far has been U.F.O. – my ( Gary – singer / guitarist and song writer ) personal favourite song off the album is ‘After all is said and done’ – It features both me and Louise on vocals, and has a real pop / catchy rock element to it that I like. Plus its 6/4 – 3/4 time signature, and the lyrics sum up the journey of a long-term relationship. The album is pretty much one big tragic love story. The final song that we all love is ‘Run’ – which is looking more and more likely to be the first single off the album. We are putting it to the public to decide which song we should release first as single, so its up to them what they want to hear on the radio first!

Boxtones: I have about 30 books of lyrics. Some stashed in my folks garage under old lawnmowers and VCR players. I started writing when I was about 17, and was really into The Stereophonics before they got shit.

Their first album was really lyrical, and I loved that style of writing. After a while, I matured into a different style of describing my stories and feelings, so it does come pretty naturally to me. Louise has just started writing lyrics for this album, so we did collaborate a lot, giving our stories the right meaning and description. Its hard at times to collaborate, but over all, we get the job done and we are both happy with the results.

RYL:  We love the song “Run”, how have you written it?

Boxtones: Thanks! That song was originally called ‘Life’s unhappy theme song’ – I wrote it back in 2002. It was converted into an acoustic song that Louise and I recorded in 2005 for my acoustic album ‘Hippopotomonstrosesquippedaliophobia’ ( which is the fear of long words – I loved that ). We all liked it so much that we recorded it again for The Boxtones, and tailored it for our style.

RYL:  Now that you have an album of your songs will you still continue to do covers?

Boxtones: The band is a business – The Boxtones FZE was founded and operate in Dubai, and we travel all over the Middle East performing at corporate events. We have performed at Yas Arena in Abu Dhabi, Abu Dhabi film festival at the palace, Taste of Dubai at the amphitheatre just to name a few. This is great work, and it can only get better, with more opportunities for The Boxtones to get seen by the public. In short, corporate work is our bread and butter, original music is our passion. When the original starts to earn us more money than the corporate, ask us that question then – and we will see…

RYL:  How was the experience of the contest “Street to Stage”?

Boxtones: That was an amazing experience. There were so many enthusiastic fans out there, and we made so many more. The exposure was tremendous, and we all worked really hard to win that competition. Now we have the title, the phone hasn’t stopped ringing for offers and meetings. Its been really something special, and it opened so many doors for us.

RYL:  Let’s talk about the song “Identity Crisis”, to what it is related?

Boxtones: Identity Crisis is a little on the sensitive side. It was initially a protest song about the problems in Bahrain ( where I spent most of my young adult life growing up ) and how the climate has changed since then. The song also talks about knowing yourself, and being true to your morals and ideals. Really, its just a sort of ‘ fuck you ‘ to the establishment and oppressive regimes or individuals that try to put you down.

RYL:  You all live in Dubai, from a music perspective what does this city give to you?

Boxtones: Dubai is a really great place to live. Its pricey, but the sheer amount of media and events companies here is staggering. We are well known around the city now, and get hired for all sorts of functions and events. The original scene is growing, and the opportunity to open for headline acts is easier than a lot of places in the world. We opened for Europe in November, and have a few more in the pipeline that we obviously cant talk about yet, but watch this space!

RYL:  how do you see your next three months, what are you going to do?

Boxtones: We are getting through the festive period, and are booked solid. I mean the band performed 24 shows in November, and we are booked for 19 so far this month. January doesn’t slow down, and February is the same, so we are really busy. We are working on concepts or some new music videos for the album, and are setting up a session to record an acoustic album version of ‘In the Pockets of Clowns’, which we will release on DVD and CD at some point next year. We are also sorting out a European / Canadian tour next year ( we are looking to see which one costs less! ).

RYL:  “Plug me in to you” is our favorite song, would you describe its lyrics?

Boxtones: Plug me into you – Ill let Louise talk to you about that – I wrote this lyrics years ago, she then got hold o them and altered them to suit her ideas on the song – so its best she tell you about it.

RYL:   which is the most important thing in being an artist?

Boxtones: Integrity. And practice!! Lots and lots of practice. You need to know your instrument and have an idea of where you want to go with your music. We all have a clear picture of what we want The Boxtones to look and sound like. I think that’s important that you all share the same goal.

RYL:  How did you get to know each other?

Boxtones: Gill ( Drums ) is my little sister, Louise ( Main Vocals ) and I are engaged to be married and have been together for 6 years. Will ( Keys ) is Gills boyfriend and Patrick ( Bass ) joined us from another band he was working in – in Abu Dhabi.

RYL:  What is your biggest desire?

Boxtones: Immediately, I think we would all love to open for The Rolling Stones who perform in Abu Dhabi on the 21st of Feb next year. I think long term, we would like someone to open for us on a stage of the same size somewhere in the world ( Redding Festival has always been a dream of mine! )

But mostly, we just want people to hear our music, enjoy it and share in our experiences.

Thanks very much, and check us out at www.boxtonesband.com where you can download all sorts of things on the band, and check all our social media pages through the website.