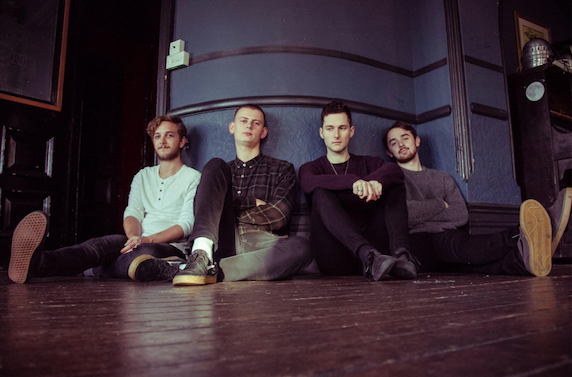 The Collier Release ‘Falling Out Of The Bed’

rockyourlyricsNovember 19, 20180 views
News0 views 01 min read
Southend’s rising four piece The Collier have today released their infectious new single ‘Falling Out Of The Bed’.
The single follows previous releases ‘Loose Hearts’ and ‘Easy To Love’, both of which received huge praise from both BBC Radio 1 and BBC Introducing.
Recorded at Rockfield Studios (where ‘Bohemian Rhapsody’ was recorded) in South Wales and produced by longtime collaborator Ali Staton (Madonna, Pulp, PJ Harvey), ‘Falling Out Of The Bed’ sees the band touching upon the weight of worry relationships can carry. A somewhat sensitive subject the group effortlessly juxtapose with upbeat high-octane guitar riffs and instantly catchy melodies.
Speaking on the new single, the band say:
“We had a really clear idea of how we wanted the track to sound: a little bit raw, to the point and in your face. ‘Falling Out Of The Bed’ represents the feeling of instant shock, and sometimes panic, of relationships. Although we didn’t initially plan on taking the track to Rockfield, the excitement of it being a new song that was so fresh in our minds spurred us on to record it while we were there”.
Comprised of Joshua Hixson (lead vocals and rhythm guitar), Ellis Davis (backing vocals and lead guitar), Shaun Bowie (bass) and George Rutherford (Drums), the band draws influence from leading rock figures stretching from The National to Sun Kil Moon, and Radiohead to Biffy Clyro.
Ahead of their string of live dates to be announced, ‘Falling Out Of The Bed’ is an immensely powerful return from The Collier, teeing the group up nicely for 2019, which is set to be yet another incredibly exciting year.