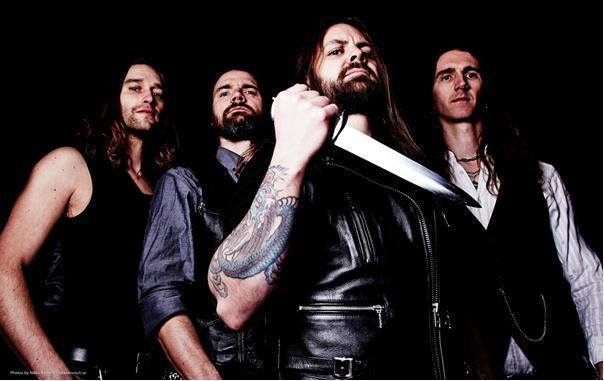 The Dagger – interview with Fred Estby

Fred Estby, drummer of The Dagger (https://www.facebook.com/daggerofficial/info), talks about his career and new album that has just been released few days ago with a launch event in Stockholm…..

RYL: Tell us about The Dagger’s lyrics, what inspired the majority of the songs? Is there something that connects them?

THE DAGGER: It’s a mishmash of stories inspired by real life (past and present), different novels and movies. There is no connection except for the “blues” feeling that we all seem to have cemented in our way of writing.

RYL: One song is titled “1978”, what has this year represented for you all?

THE DAGGER: It’s pure nostalgia to us and brings back memories of albums and artists creating musical magic that year. Many of those have been the main influence on our musical upbringing.

RYL: “Skygazer” is the second single from the album–why did you select that song? (Congratulations! It rocks!)

THE DAGGER: Hehe, thanks! It was actually Century Media who selected it. It is a great track and it felt natural to follow up “Ahead Of You All” with “Skygazer”.

RYL: What does the song “Ahead of you All” mean to you?

THE DAGGER: It’s all about refusing being put down by nay-sayers and negative input around you. To turn whatever frustration you feel in daily life into energies of achievement.

RYL: When did you learn to play drums?

RYL: Who taught you how to play drums? Who is the best drummer of all time in your opinion?

THE DAGGER: Nicke Andersson was teaching me the basics and helping me to develop my poor skills into actual drum playing.

Wow! There are so many, but here we go:

–Ronnie Tut (Elvis Presley)- He was fantastic AND had 2 bass drums early on.

–Brian Downey (Thin Lizzy)- What a genius drummer. I don’t get why people aren’t mentioning him more often in the music world.

–Billy Cobham- I don’t listen to jazz, but this guy makes me listen to it because of his playing.