The Deep & The Dark – Interview with Clémentine Delauney – Visions of Atlantis

Your album “The Deep & The Dark” is about to be released, can you share with us the most difficult moment of its preparation? And the craziest one?

Hello! The most difficult step was to realize that we had to change our line-up again and write this album with other people than the founding members of the band.

For more than 2 years we’ve been waiting for them to write songs but since they had not been in a band for over 10 years, adding this activity on top of a full-time job and a family was too much for them.

We were losing faith and hope that this record would ever see the light of fay…Eventually we realized we had to change the way things were and when we started to work with our producer, Frank Pitters from Silverline Music, it was clear for us that it would be the way to make a new album.

When it comes to the best parts, I love to create and to work in the studio with other people, sharing ideas, recording, writing. Siegi, Frank and I had very inspired moments and we enjoyed the whole process of writing “The Deep & The Dark”. 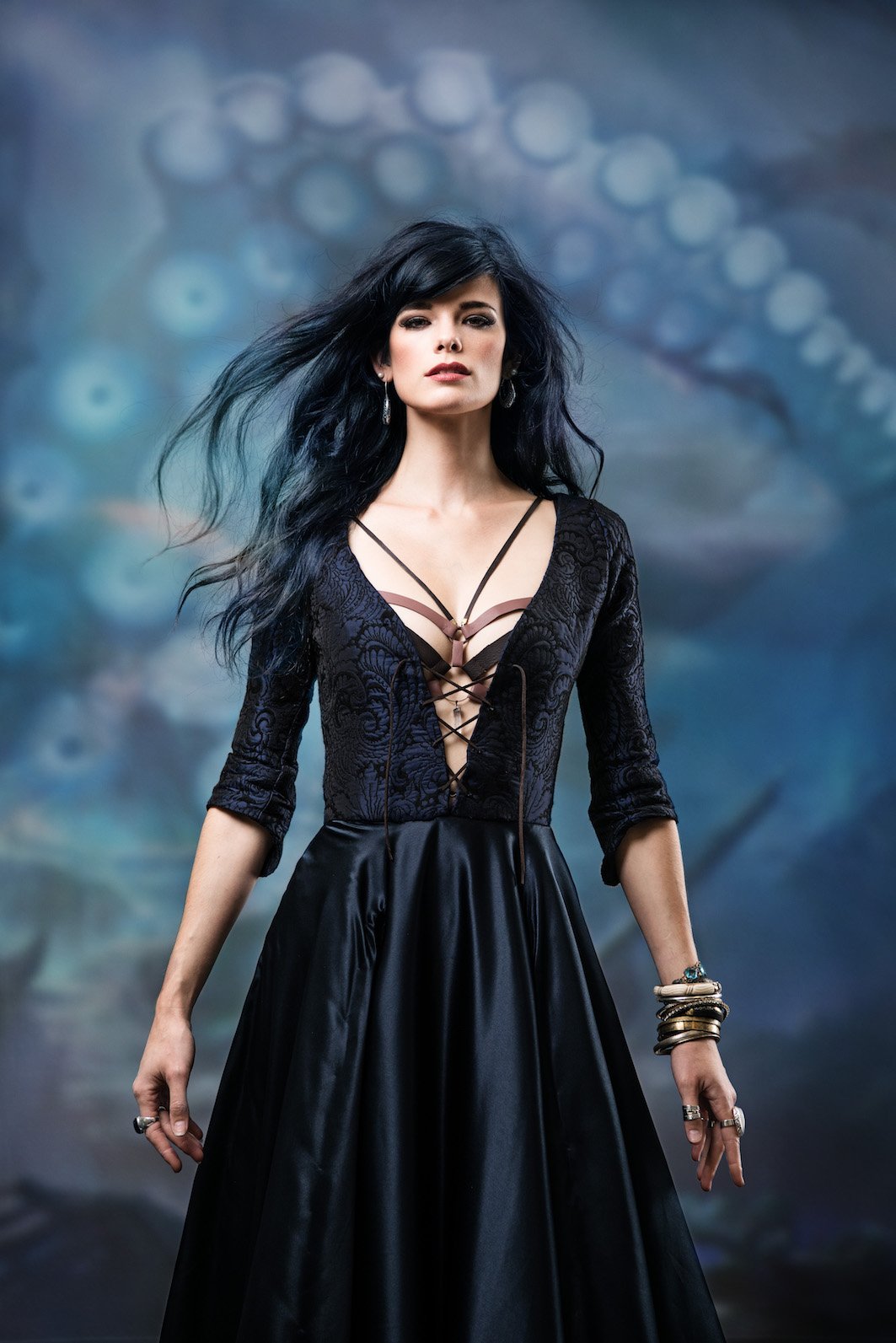 I start listening to the song, without vocals, to get inspired by its ambience and letting emotions invade me.

Then, some words might come up naturally with the vocal melodies and I start writing them down. I don’t necessarily start with the first verse, sometimes I start with the chorus, or the bridge.

Once I start writing, the message or story gets clearer and then I know what I want to say. The hardest part is to choose the right words and to place them correctly on the music and melody rhythm.

Siegi helped me a lot in that matter!

Oh, this is very hard for me to judge. The lyrics of “Book Of Nature” were the last ones I wrote for this album, and as I got better at writing during this couple of weeks, they felt easier to write and didn’t require so much correction! I am pretty happy with the verses of this song. 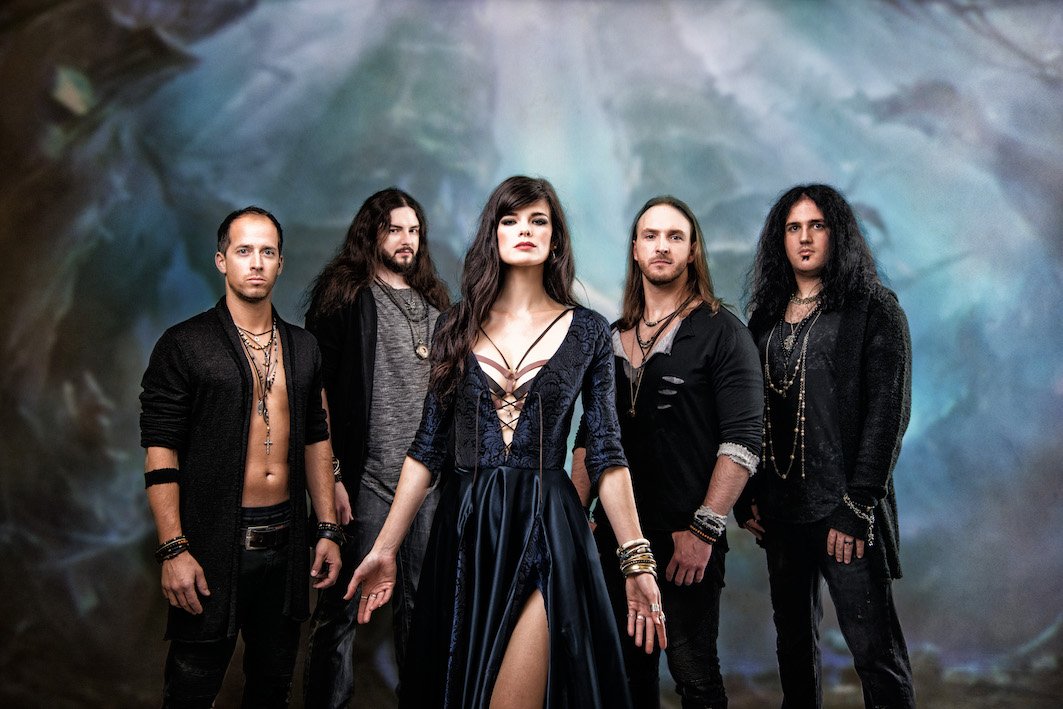 So many different artists, different kinds of music! But I was a great fan of Madonna and Michael Jackson!

Yes, my parents are big music lovers, especially my dad who owns a collection of over a 1,000 vinyls!

Home was always filled with music, from LED ZEPPELIN to French singing artists, jazz and classic. I started singing when I was very young, most probably because of this musical environment!

How did you first get your foot into the industry?

I was 20 years old when I started to promote metal shows in my town, Lyon. This is how I started to get involved in the music business, behind the scenes, not on stage! But I had been part of a band some years before and I was missing this a lot.

I tried to found my own band for some time, but back then, no guitarist really wanted to be part of a “female fronted” metal band.

So, I kept helping other bands perform and kept trying to work with other people until I got to know that WHYZDOM from Paris, was looking for its new singer.

At first, I hesitated to send my application, thinking I wasn’t good enough for it, not experienced enough, but then I realized I had nothing to lose and that I really wanted to be part of the band!

So, I sent it, passed the audition and they chose me to become their new voice!

This is how I got into the music business as an artist, in late 2010!

Very diversified and full of surprises! I am so happy that I got the chance to work with several different projects such as SERENITY, MELTED SPACE, MYRATH, EXIT EDEN and with Kai Hansen, on his first solo album.

I played every kind of shows: in front of 7 people somewhere in Switzerland, up to dozens of thousands at Wacken with HANSEN & FRIENDS. Each time it’s a new experience, a new opportunity to learn.

I’ve always loved to collaborate with various people, it enables me to explore my own voice, my creativity, my limits.

But I have to admit that I really appreciate the stability I have now with VISIONS OF ATLANTIS, being able to look at things in the long-term perspective, which I could never really do before.

I have always been attracted by esoteric knowledge and practices, which I approached when I was a teenager and to which I am coming back since some time now.

The Celtic influence in the music inspired the topic: the person singing is a witch, preparing herself before making a magic ritual.

She describes her state of mind and her intention, which the most important aspect of this practice.

The message in the song is very clear and strong and reveals all what magic is about: sending Love out in the universe.

Love as the purest feeling to protect people and our planet.

And, “the Grand illusion”?

Its deals with people being fooled either by their feelings, their desire or by substances… Sometimes we are addicted to what hurt us, we can’t get enough of something or someone, for the wrong reasons, but we are not aware of it.

To me “The Grand Illusion” reflects the confusion between lust and pure love, sometimes we say “I love you”, but it actually means “I want you” … This song is about how luring seduction can be and many things can be seductive…

No, I’m not, I believe this is what art is about.

I cannot write sincerely about something that has no connection with myself. We speak ourselves openly through everything that we create with sincerity.

I wrote my songs, my melodies and my lyrics, being the most naked and honest as I can be, choosing the words and the messages so that they would really translate what I feel and believe in.

If you really read the lyrics of “The Deep & The Dark” and get their meaning, you will get to know me, what I love, fear, and what I stand for.

If strangers can relate to what I’m expressing and they appreciate what I have to offer, I am very grateful for it.

Do you remember the day you wrote “book of nature”?

Yes, I was under pressure haha! It was the day before I had to make the final recording of the song, I was at Siegi’s place in Vienna.

I will always remember playing Wacken with Kai Hansen, this show in 2016 has been very special to me indeed.

I can’t tell if it was the “best” show from me though haha!