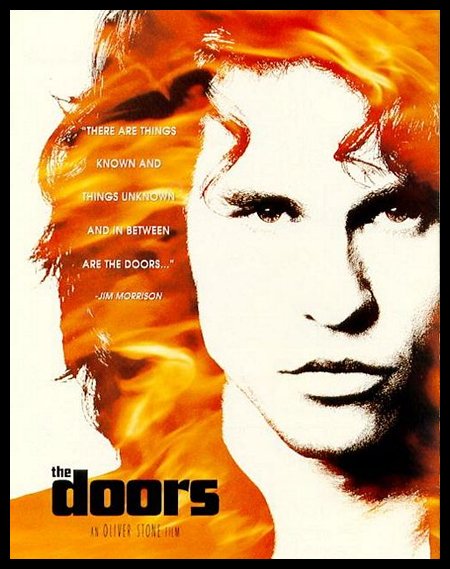 The Doors – The Movie

A very young Val Kilmer ( 22 years ago) playing the role of Jim Morrison, Meg Ryan as Pamela and a multi-awarded director as Oliver Stone are a guarantee that this movie is a must see not only for all the lovers of The Doors or Rock and Roll but also for the general audience.

The story is the one of The Doors, the legendary band from Los Angeles formed by Jim Morrison, Ray Manzarek, Robbie Krieger and John Desmore.

Under the spotlight during the movie is the personality of Jim Morrison, his way of seeing things, the music, the art and the willingness of being more than just a singer in a rock and roll band.

Reading several books and articles about Jim Morrison you will find out that the movie is very close to what happened during these years; remember, we are in the late sixties but the story looks really modern.

Jim was like that, he was quite ahead of his time, his style, the way he expressed himself the desire of being in a world free of hypocrisy….Val Kilmer was able, in our opinion, to “catch” quite well this particularity of Jim.

Billy Idol was part of the cast of the movie

Have you noticed the resemblance between Jim and Val? it is just crazy isn’t?

We almost forgot: the soundtrack…….well, you can imagine………..THE MOST IMPORTANT SUCCESSES OF THE DOORS!!