The Final Broadcast – Interview with CLEAR THE AUDITORIUM

RYL: Your new album “THE FINAL BROADCAST” was just released, what this title does mean for you? Which was its main achievement in terms of lyrics?

CLEAR THE AUDITORIUM : Part of the theme of the EP follows parts of a radio broadcast, the last radio broadcast before the end of the world, hence the title ‘The Final Broadcast.’ 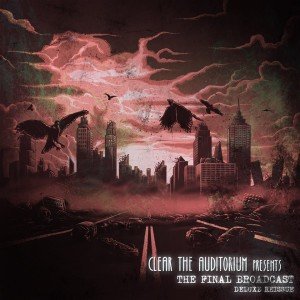 It would be difficult for us to choose our favourite lyrics on the EP, but if we had to choose it would probably be the lyrics of Ozymandias, which are inspired by the poem of the same name by Percy Bysshe Shelley, but from another perspective.

CLEAR THE AUDITORIUM : The Final Broadcast is a concept record set after a nuclear war, following a group of struggling survivors in the wasteland, so the lyrics all have that central theme which links them, but they also cryptically talk about real life experiences and personal feelings. Lots of metaphors!

RYL: Tell us everything about our favorite “We are the danger”…

CLEAR THE AUDITORIUM : We Are The Danger is a song about survival. Its about being the underdog and trying your hardest to come out on top, something that we as a band are all too familiar with.

It’s partially inspired by the show Breaking Bad, who’s main character Walter White starts off as the underdog, and as the show progresses, becomes ‘the danger.’

CLEAR THE AUDITORIUM : Usually, I (Taf, Vocals) wait until we have a track finished instrumentally, then listen to it until I get a feel of how the vocals should sound.

I usually come up with melodies first, then wait for inspiration to strike me for the lyrics. I’m most comfortable when writing about a specific theme, so our music usually has some sort of story going on.

CLEAR THE AUDITORIUM : Ozymandias probably has my favourite verse. “I used to think I would stand the test of time / I used to think that the world would always be mine / There was a path I had to take, and I can’t hide from my mistakes / but it’s better to fade away than to never shine.”

RYL: what inspired the lyrics of “If we Burn”?

CLEAR THE AUDITORIUM : If We Burn, in the context of the EPs story, is about the war itself and its effects on humanity. (“This is the end of all we know”) but it’s also just about change, inevitable change that we all have to face in our lives.

It was written at a point when we were all finishing our time in high school and getting ready to start university, which is a big and scary thing when you don’t know what to expect.

The chorus and title are inspired by book Mockingjay by Suzanne Colins, which deals with revolution against a corrupt totalitarian government, a theme which we continue on The Final Broadcast.

CLEAR THE AUDITORIUM : Right now, it would be Anaesthetist by Enter Shikari. It’s the new single from their new album and talks about the importance of the NHS here in the UK and opposes it’s privatisation. It’s one hell of a song.

CLEAR THE AUDITORIUM : Our favourite show would either be our show with The Blackout in Pontypridd, or opening up the main stage at Merthyr Rock.

Both were incredible and so much fun! We love having a big stage to run around on, it makes the show so much more exciting.

CLEAR THE AUDITORIUM : We’ve had a fair few lineup changes over the years and new members always bring something new and different to the table. If we were to play you our early demos you wouldn’t think it was the same band!

We’re always experimenting and trying to develop. We’re not afraid to try anything with our music, if we like it, we’ll write it.

CLEAR THE AUDITORIUM : Vacant Streets was actually also inspired by a poem, there’s a lot of literature influence on this EP.

It was based on a poem called ‘The Listeners’ by Walter de la Mare, which is about a man returning to a place he used to know and finding it empty and abandoned, but feeling a presence there, as if he’s being watched.

In the context of the story, it’s about a survivor returning to their home after the war to find it destroyed and devoid of life, but feeling like he’s being watched by the ghosts of the people he used to know there.