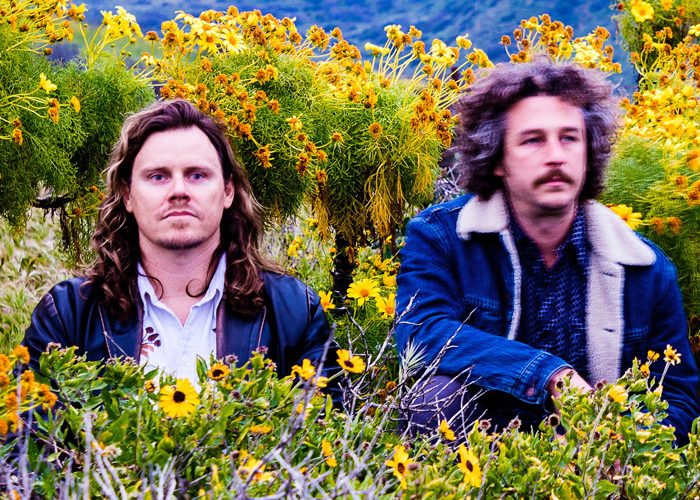 The Golden Shore – Interview with We Are The West

Brett: Ideally when the song is being born. That’s only happened a couple times for me, where all the words just come out when I’m first starting to sing something. But generally I find that I’ll have a kind of bed of music, usually chord based, that inspires a mood or setting, and then when I can’t hold back anymore I’ll start singing. Certain words might fall out that feel right, and then the detective game is on, trying to decipher the missing words, digging in the dirt, casting about. I think of an Egyptologist blowing dust and sand off of hieroglyphics. A lot of times it’s just waiting. But actually I usually won’t write anything down until I’ve lived with the tune for a while. I might make a recording and try to decode the syllables that come out. There’s no set path, though. Each song has been pretty different. 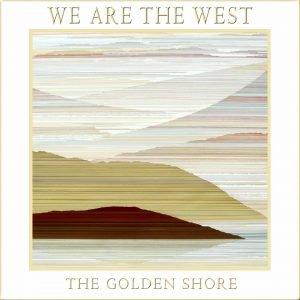 Is there a link/a theme between all the songs of your album “The Golden Shore”?

Brett: There are certainly links between them, though maybe not all conscious. Clearly there’s a nautical theme that’s developed. The album is a journey, but we wrote each song as an entity unto itself. The only time I can think of that we purposely tried to link a couple songs was with a previous recording. Our third EP is a triptych we called ‘The Trilogy’. While we were recording it we’d just started to write ‘More Machine Than Man’, and we knew there was something special about the tune and that we’d be doing some serious work on it. So we added in some foreshadowing in ‘The Trilogy’. Check it out if you like. https://wearethewest.bandcamp.com/album/we-are-the-west-iii

Brett: No, not really. I don’t think we write that narrowly.

Brett: Our journey has been largely outside the industry in many ways. With this album we’ve invested so much into it that we’re starting to see a little more of it, but we’ve always strived to keep our music and our motivations for making it pure.

Brett: My older brother and I got into music at the same time, so he influenced a lot of my early taste. We got really into George Harrison’s Cloud 9 record, and then one day my brother came home from school with amazing news, “George Harrison was in this old band called The Beatles!” For whatever reason we ended up buying their whole catalog in chronological order, so I quickly grew up and into them deeply. Paul Simon was also big for us, then Crowded House, The Cure, Johnny Clegg and Savuka after we got to go to Africa. My brother started getting into electronic music. We turned our garage into a discotheque, painting the floor, getting lights and a mirrorball, and I’d DJ from the luggage loft, playing Depeche Mode cassettes. The Pet Shop Boys was my first concert, though in hindsight it was more like a Broadway musical, with costume changes and sets and stuff. Crowded House was my second, and I’m still a huge Neil Finn fan. My dad’s a filmmaker and he’d fill up the cabinet with movie scores, so I’m sure those infiltrated my brain too.

Brett: Michael Jackson’s ‘Bad.’ I’d sing Man In The Mirror in the mirror.

John: Ned’s Atomic Dustbin ‘Kill Your Television’ was my first. I had $20 and bought the coolest looking CD I could find.

What is your favorite song (not written by you), lyrically speaking?

Brett: That’s an impossible one! There are so many. Today I’ll say, ‘Visions of Johanna’ by Dylan.

Brett: John wrote most of the music for that one, and I’d roll around with his demo that he called the Dirty Ditty. We both live on the westside of LA, and take the Pacific Coast Highway to go between our places. I think that drive probably inspired a lot of the lyrics.

John: This song came about soon after I moved with my family to the Netherlands. I had a young daughter at the time and had to be quiet as she slept, but it was also the only time I was able to play music. I recorded a rhythm track using a jar of parmesan cheese as a shaker and an oatmeal tin as a bass drum and began playing guitar and singing. At some point it struck me how funny the whole situation was and it really just seemed like a random Tuesday and, at the same time, special. It got me thinking that that’s what it’s like everyday for everyone. On the same day someone gets married or has a baby, someone else is sleeping off a hangover or making music with cheese, or whatever. We all share time, but spend it differently.

Do you remember the day you wrote “The Watchers.” What is the song about?

Brett: ‘The Watchers’ took more than a day to write. I remember playing the first version of it to John at his place, and it had a bridge that he didn’t like, which I still sometimes hear in my head. The song had a Gershwin kind of feel to it, and on the recording we aimed a little bit for the end of ‘The Shining’ ghostly feel. I was still retooling the lyrics to the middle section in the studio as we were trying to lock down a version. The engineer thought we didn’t get it, but there was one take where the lyrics just crystalized there, and a couple days later looking back at it, we realized we had the version. I think of it as a story song, a kind of love affair get-out-of-town deal. The Watchers themselves come from a piece of California folklore, Los Vigilantes Oscuros, the Dark Watchers.

Brett: Thankfully we’ve now played so many wonderful shows that it’s impossible to choose. We just had a great show last week in this underground parking garage where we put on a monthly concert series, the Saturday before each full moon. Our album release show last month for ‘The Golden Shore’ was also one for the ages. We played the whole record from top to bottom with many of the people who played on the recording, and it was a beautiful night.

Brett: We’ll be hitting the road quite a bit, taking the new album out to the world. We’re touring California, Oregon, and Washington, possibly Hawaii this summer, playing beautiful spots like Yosemite and the Mendocino coast along the way. We’re very proud of ‘The Golden Shore’ and want to send it out in style.